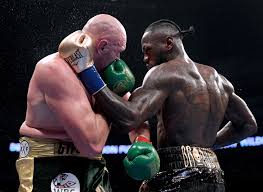 The Bronze Bomber versus The Gypsy King Part II.

It sounds like a damn monster movie and the rematch between heavyweight world title holder Deontay Wilder (42-0-1, 41 KOs) and lineal champion Tyson Fury (29-0-1, 20 KOs), on February 22nd at the MGM Grand Garden Arena in Las Vegas, is fixing to be just as entertaining as one.

The Wilder-Fury sequel is arguably the most anticipated heavyweight rematch in almost a quarter-century since Evander Holyfield fought Mike Tyson back in 1997.

Wilder vs Fury II has ESPN and FOX Sports co-producing and joining forces on the event, which is unprecedented.

You can bet the house that ESPN and FOX Sports will be promoting the hell out of it.

“Having networks like ESPN and Fox come together and create awareness for a fight is really unprecedented,”,Top Rank President Todd DuBoef told Yahoo Sports.

Fury has risen from drug abuse, 400-pound obesity and near-suicidal depression, while Wilder, who once waited tables at IHOP, became a professional boxer to support his daughter, who was diagnosed with Spina Bifida as a newborn.

“After February 22nd there will be no more unanswered questions. I will finish what I started, and this time [Fury] will not be getting up off that canvas…”, Deontay Wilder.

“Watch me knock out Deontay Wilder AKA The Big Dosser.”, Tyson Fury.

What will sell this rematch more than anything else is that outstanding fight they had on December 2018 at Staples Center in Los Angeles, which ended in controversy.

However the final mess did finally end – in short, the whole damn thing was astounding and the controversial ending — makes Part II an easy sell now ESPN and FOX Sports.