Who needs it more the Lightning or the Stars? 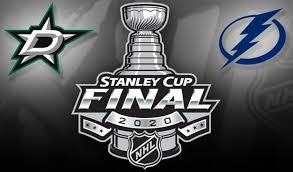 First from the western conference we have the Dallas Stars. The last time they won a sanely cup was 1999. The Stars were led by captain Derian Hatcher, head coach Ken Hitchcock and goaltender Ed Belfour. The Stars defeated the Sabres four games to two to win their first Stanley Cup, becoming the eighth post-1967 expansion team to earn a championship, and the first team based in the Southern United States to win the Cup.

The series ended with a controversial triple-overtime goal in game six, when replays showed that Stars forward Brett Hull scored with his skate in the crease. Although the Sabres protested later, the league stated that the goal had been reviewed and was judged as a good goal, since Hull had maintained possession of the puck as it exited the crease just before he shot it. So, in the end good goal and the first Stanley cup for Dallas.

Next from the east the Tampa Bay Lightning. Back in 2004 the Tampa Bay Lightning defeated the Western Conference champion Calgary Flames in seven games, becoming the southernmost team to win the Stanley Cup. It was Tampa Bay’s first-ever appearance in the final and was also surrounded in controversy. In game six there was a dispute over a Martin Gelinas redirect that appeared to have gone in off of his skate. A review from one camera angle appeared to show the puck crossing the goal line before Khabibulin’s pad dragged it out, though some argue that the puck had not only been knocked several inches above the goal line making it seem like it was in the net when it wasn’t.

Both of these teams have a very tampered victory that gave them their only Stanley Cups up to that point but that can all change this year as both of them have a chance to become the 2020 Stanley cup champions. But which one needs to overshadow the old title from history and that would be the Dallas stars as they actually broke a rule at the time to win the title so they deserve the 2020 Stanley cup title.