Two Words to Both BYU & Coastal Carolina: Thank You 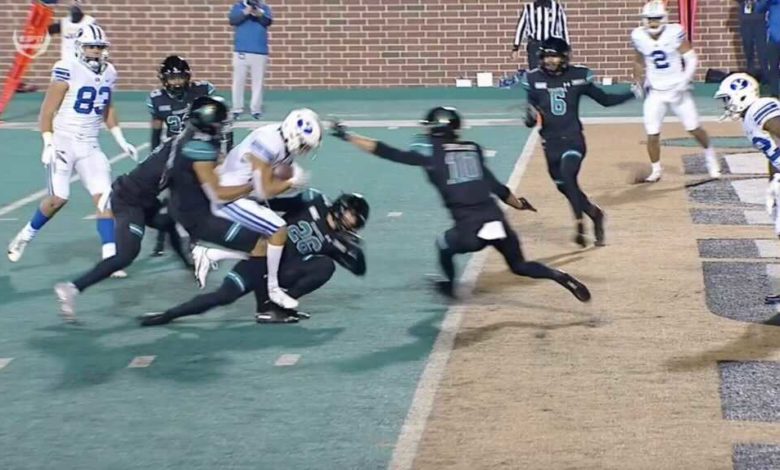 NEW YORK, N.Y.- It’s not often that we say the phrase “Thank You” in 2020. It’s been a year from hell to put it lightly. With regards to sports, this year has been anything but normal, from stoppages of seasons to delayed starts to no fans in the stands. But something happened this past weekend that had me and many other college football fans uttering those two words.

Last Saturday’s slate featured many timeless rivalries that run deep in the blood of college football. Alabama-LSU. Florida-Tennessee. Ohio State-Michigan State. But the game that caused the most excitement and held the most anticipation was a game that wasn’t on anyone’s radar two weeks ago. Heck, it wasn’t even officially on the schedule until 48 hours before kickoff. But BYU-Coastal Carolina not only turned out to be the game of the weekend, it hopefully broke an age-old stigma that will make the sport better going forward.

In case you missed the backstory, the Chanticleers, ranked 18th in the College Football Playoff poll, were originally scheduled to host Liberty with College Gameday on hand for that matchup. Instead, because of COVID issues with Liberty, the game had to be canceled. Coastal acted quick and helped out not only themselves, but college football fans in the process. BYU, in a bye week, was also looking to add a game to counter the argument from the CFP committee that cited a weak schedule in justifying their No. 13 ranking. The Cougars were available and took the game, agreeing to fly across the country on the drop of a hat and play a game in which both teams had a grand total of two days to get ready for.

This set the stage for one of the most thrilling games to have been played this season. The Cinderella story that is Coastal Carolina continued, as despite being smaller, slower and weaker than the Cougars, their spread option offense gave BYU enough fits and their mullet inspired defense got a stop at the two-yard line to win the game.

Spinning this forward, college football needs more of what Coastal Carolina and BYU did. Not intimidated to play another good team or complain about the hurdles their team has to clear in order to play a game on short notice. This brings me to voice one of my biggest frustrations that commonly occurs in the sport: Scheduling non-conference games 10 years in advance.

Some games are scheduled so far in advance that the players who would play in that game aren’t even born yet. As we sit here in 2020, there is a game between Kansas State and Rutgers scheduled for 2031!!! Seniors on that team are just wrapping up their first year on this earth. Notre Dame and Alabama will play a home & home series starting in 2028. Other incredible future matchups include LSU-Oklahoma, Michigan-Texas, Oklahoma-Michigan and Notre Dame-Texas A&M. All of these intriguing and different games are at least four years away. So, the question is: Why? If BYU and Coastal can schedule a game 48-hours away from kickoff, why are these big-time programs scheduling games that feel like they are 48 years away?

Whether the excuse was it’s never been done before or it’s too difficult to do, this crummy year has proven that those excuses aren’t valid. Fans want to see big games between great teams, and they want to see them now. On paper, Michigan-Texas or Alabama-Notre Dame sound like tremendous matchups if they were played next year, but who knows down the road if any of these teams are even good by the time they actually play. There’s no guarantee that Nick Saban will still be leading the Crimson Tide when they head to South Bend in 2028, as he’ll be 77 years old. If the program takes a step back once Saban retires, that sexy matchup now is less intriguing.

It’s extremely rare and frankly unprecedented that football powers like Alabama and Texas would take the lead from a small school like Coastal Carolina, but it’s been a year for the unthinkable. So, thank you to both Coastal Carolina and BYU, who put on an incredible show and gave college football fans a lasting memory. We’ll see if other schools notice this and change their scheduling habits in the future. Even if nothing else comes out of this, these two schools proved that in a year that has given everybody lemons, you can still make lemonade.