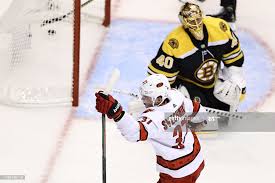 While MLB struggles to maintain consistent scheduling for all teams due to COVID, the NHL Playoffs (except Tampa Bay-Columbus causing the delay of Boston-Carolina due to 5 OT) continually provide results.

Friday’s schedule sees the remainder of Opening Round matchups complete Game 2 of their series. Here are the five interesting notes around the league.

Dillon Dube (CGY) – Flames rookie center has four goals in his first six postseason games. He’s also scored the first goal in three straight postseason games. (I’m waiting on hockey-reference to fix their site so I can provide more insight on this.) Dube scored just seven goals in his 45 regular-season games, and entered Game 1 against Dallas with one goal in his last 17 games overall.

Youth is served: Svechnikov represents the youth movement in the 2020 postseason, as five of the seven leading goal scorers are 24 or younger.

New York Islanders – Entering Game 2 of their series against Washington, the Islanders lead the Eastern Conference averaging 3.4 goals per game. New York ranked 12th in the East during the regular season, with a goal per game average of 2.78.