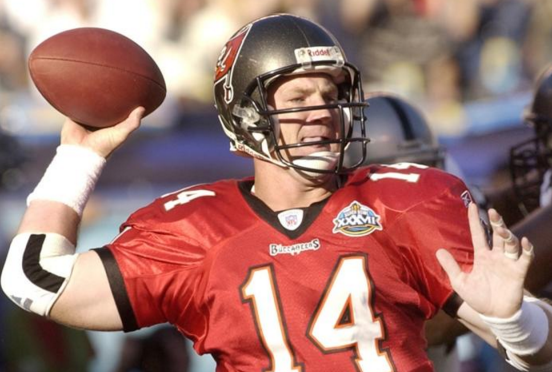 Photo Credit: tampabay.com
Tom Brady may have seven rings in hand, but number seven put him in rarified territory. By beating the defending champion Chiefs on Super Sunday, Brady became the second Tampa Bay Buccaneers quarterback to lift the Lombardi Trophy. The first? Brad Johnson, and yes, I did hear the lightbulb turn on in your head.

The year was 2002 and the Buccaneers’ offense did not light up scoreboards by any means. Ranked 18th overall, 15th in passing, and 27th in rushing, Jon Gruden’s club was not flashy, but they got the job done. This came thanks to their top-ranked defense in the league, led by future Hall of Fame linebacker Derrick Brooks.

Tampa Bay’s defense tallied 38 takeaways, with 31 of them being interceptions. With their defense tied for third in takeaways and leading the league in interceptions, the Buccaneers’ offense was the benefactor. Starting on average at his own 33-yard line, Brad Johnson went to work.

When I say went to work, I do not mean Johnson threw 50-yard frozen ropes all over the field. Instead, Johnson was rather meticulous and careful with the football. Even as a quarterback, Johnson did not lead the team in interceptions. Cornerback Brian Kelly took home that crown with eight interceptions, while Johnson only threw six picks the entire season. Let that sink in. Johnson threw fewer interceptions than Kelly grabbed. What’s better is that Brooks was right behind Johnson with five interceptions of his own. 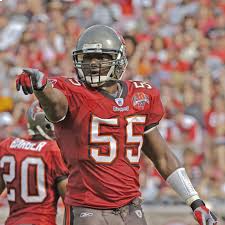 Photo Credit: bucsnation.com
Quite the opposite of this year’s title-winning team in Tampa, huh? Brady and the Bucs were a 31 points per game freight train with a defense that turned it up a notch in the playoffs. On the other side, Johnson’s Bucs were built around a conservative offense that did not turn the ball over. It was the defense’s job back in 2002 to make the game-changing and explosive plays.

Brady threw 40 touchdowns this regular season, while Johnson threw only 27 touchdowns the entire 2002 season including the playoffs.

As Tampa Bay bounced the 49ers and Eagles in the playoffs en route to Super Bowl XXXVII, Johnson maintained his meticulous mindset. The 34-year old attempted only 98 passes completing 53 of them for 670 yards throughout the playoffs. With a mediocre stat line of three touchdowns and two interceptions heading into Super Sunday, how were Johnson and the Buccaneers’ offense going to keep up with the Oakland Raiders’ attack led by league MVP Rich Gannon?

The Raiders came into Qualcomm Stadium with the NFL’s second-ranked offense averaging 28 points per game. Super Bowl XXXVII was an old fashion battle between a top defense and top offense. And as the saying goes, defense wins championships.

Gannon deservedly won MVP in 2002, throwing for 4,689 yards and 26 touchdowns, while only throwing 10 interceptions. Little did Gannon know he was in for the nightmare of his life against the lights out Buccaneers defense.

Gannon almost outdid his 10 regular season interceptions in 60 minutes by throwing five on football’s biggest stage. Two interceptions by eventual Super Bowl MVP Dexter Jackson set up Johnson and the Buccaneers to take control of the game. As usual, Johnson methodically marched his team down the field, and he did it more than once.

After fullback Mike Alstott punched it in from two yards out to go up 13-3, Johnson led back-to-back touchdown drives spanning across the half. Going into and coming out of halftime, Johnson possessed the ball for 11 minutes and seven seconds, ending both drives with touchdown passes to Keenan McCardell to extend Tampa Bay’s lead to 27-3. A lead they would never relinquish. 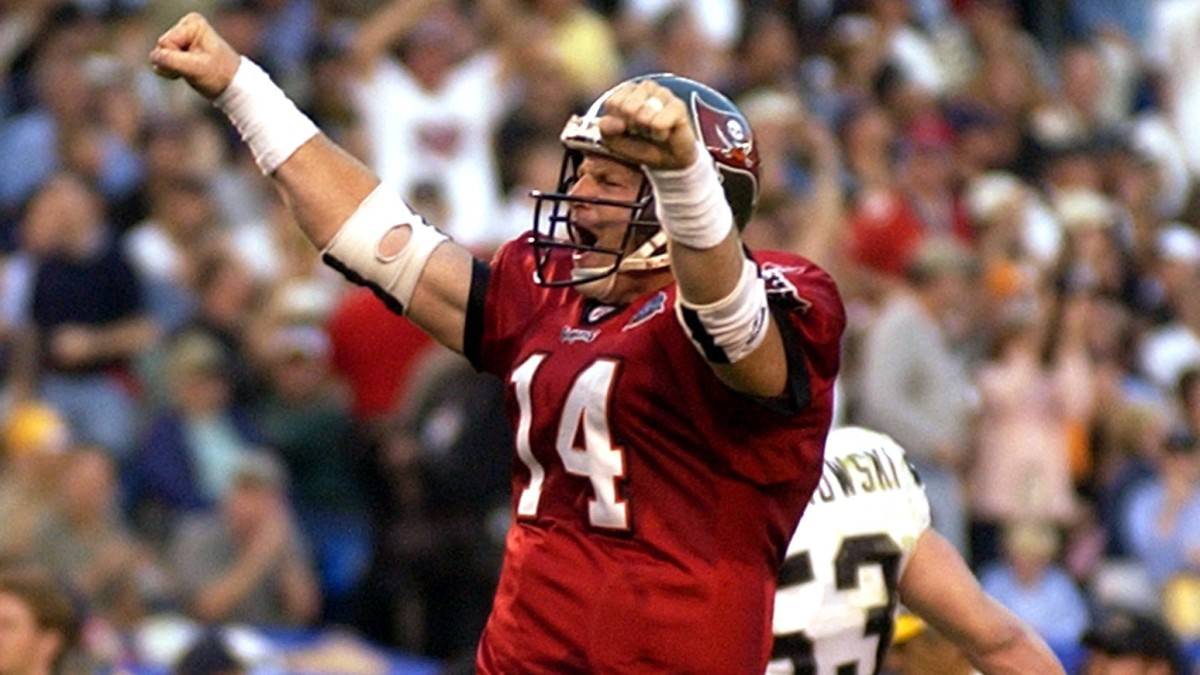 Photo Credit: latimes.com
The Buccaneers’ elite defense closed out their team’s championship run with the final three of Gannon’s interceptions. And they were all pick-sixes.

Immediately following Johnson’s second touchdown pass to McCardell, defensive back Dwight Smith took Gannon’s pass back for a 44-yard score. Do not worry, you will hear Smith’s name again in a moment.

Fast forwarding to the fourth quarter, the Raiders were hanging on for dear life trailing 34-21 with under two minutes remaining. Derrick Brooks cemented the Super Bowl with a 44-yard pick-six of his own. But wait there’s more.

Leading 41-21 in the final seconds, the Buccaneers were bored of 44-yard pick-sixes. So, Dwight Smith decided to take another Gannon pass back down the sideline, this one going for a 50-yard pick-six.

Tampa Bay went on to win Super Bowl XXXVII 48-21 led by that impenetrable defense and a quarterback who just did not make mistakes, Brad Johnson.

He did not put up the stat lines Tom Brady did, but Brad Johnson delivered the title to Tampa Bay. Wins all count the same in football whether you win by seven or 27. The end goal is to win Lombardi Trophy whether you light up the stat sheets or not.

But let’s remember that before Tom Brady partied with the Lombardi in Tampa Bay, Brad Johnson was a man in rarified air. And now Johnson has some elite company.