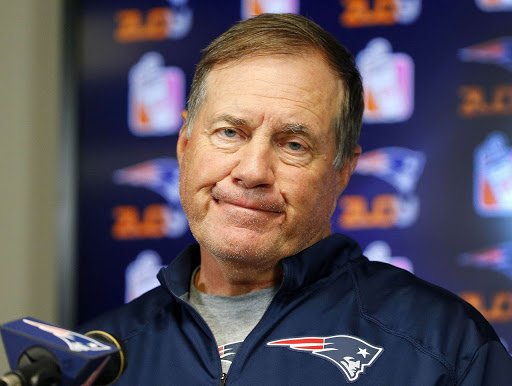 Bill Bellichick (Probably): I’m the smartest man alive. Tom still needs to get one more ring to catch me in the jewelry contest. Is Jarrett Stidham still looking at me? Ugh, he is just so terrible. Maybe if I don’t look over there, he will go away. Cam is just as handsome as Tom and Jimmy, AND more fashionable. Siri, remind me to get more baby oil for Jonnu’s abs. I bet Hunter Henry is self-conscious about his breath when meeting new people. I don’t know how to tell Bob that I need to stay wound tight and I don’t want massage coupons for Christmas. I’m sorry I got the wrong dog food, Nike, but did you have to bring Van Noy back? Are we on to Cincinnati, or onto Cincinnati? That kid with acne pushing carts at Costco has such a great attitude…I wonder if he can catch a slightly deflated football? Agholor can catch these millions falling from our burning building. We would have pursued Fuller if he didn’t get caught. Alexa, how much do ventriloquists make? Googling Tom Brady’s son’s age… 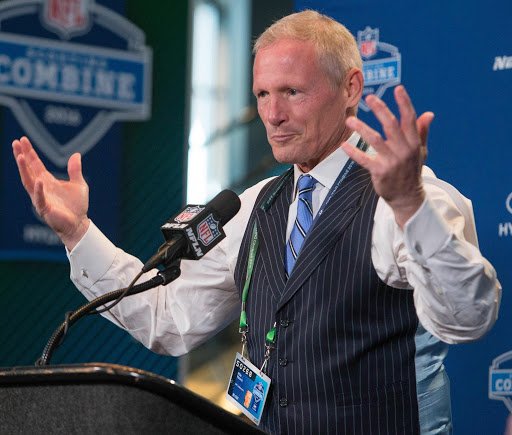 Mike Mayock: (Definitely): This shirt looks great on me. I did run 17 miles before 6 AM, so there’s that. I’m gonna text a picture of it to Jon. Knock on wood if you think Jon will like it. He did. Rube. Maybe I’ll show it to my Soul Cycle group on Facebook. Posted. Can’t believe all the (expletive) moaning the media made over me signing Kenyan Drake. Don’t they know dual backs are gonna be the future of the NFL? Guess they failed to notice what Nick Chubb and Kareem Hunt did last year when they dominated the league? And we beat them 16 to 6! They couldn’t do anything on the ground. Suckers became one-dimensional and we shut them down. Rubes. Now Jon’s texting me a picture of his shirt. He’s wearing the same shirt. Dammit! “Mandy! Bring me a new shirt!!” Just saw that Chet Gresham gave us a (expletive) terrible free agency grade. What kind of name is “Chet” anyway? What does he think he’s friends with the Hardy’s Boys or something. Now those were good clean wholesome books. Books a man could enjoy after a morning of church with the family and then refresh his thirst with sparkling pink lemonade. But not with too much sugar. And how dare he say that “The Raiders have done a number on their offensive line this offseason.” People act like Rodney Hudson, Richie Incognito, Gabe Jackson and Trent Brown are the WHOLE LINE. So annoying that no one but Jon fully understands my vision for this team. Rubes. The whole lot of them. 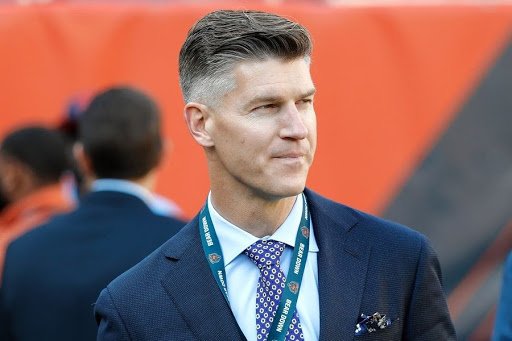 Ryan Pace: (Most Definitely): I was so close to ‘Cooking with Russ’ and now I’m ‘Down to Dalton.’ This isn’t good. (Throws bronze Bear paperweight across his office). Do you think people noticed? I already (expletive) traded up for Mitch instead of drafting Mahomes and now the Russell Wilson deal gets woodchippered. And now Kyle Fuller bolts to the Broncos. Unbelievable. (Peeks through office shades.) Do they know I’m only 42-54 over the last 6 seasons? (Catches a glimpse of himself in the full-length double-paned mirror, he smiles and runs his fingers through his hair.) Does it make me look smarter or dumber when I squint? I think smarter. But, I just can’t tell. Squint. No squint. Squint. Maybe if I just purse my lips together and furrow my brow at the same time. Yeah, that’s the Blue Steel look daddy needs. You are Ryan (expletive) Pace, the General Manager for the Historic Chicago Bear franchise and never EVER let anyone forget it. (Closing the shades he turns and walks to his desk, accidentally stubbing his shoe on the Bears paperweight on the floor). (Multiple expletives)!! Now how am I going to successfully sell Andy Dalton to the fan base? ‘Andy Dalton is the future of the franchise.’ That didn’t sound right. ‘Andy Dalton has a future with this franchise.’ Hmmm. ‘Andy Dalton is a member of our franchise.’ Nailed it… 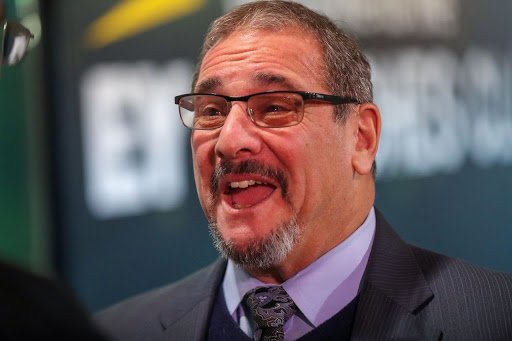 David Gettleman (Probably): Can you believe these people? First, they’re screaming at me with torches and pitchforks and now they’re calling me GettleGod because I gave a bunch of money to guys who barely play half of their team’s games. I liked it better in Carolina because they really didn’t pay attention when I cut the whole team after blowing all the cap space on brittle players the year before. Here’s hoping the NY media will be their usual understanding self when I do the same thing. I have no idea how we are going to keep Saquon here, so I hope they don’t ask. I hope the fans don’t mind that our only good player we can keep next year is Leonard Williams. Kenny Golladay’s hip can predict rain in the forecast, John Ross was hoping that the NFL was just running straight for 40 yards in Spanx, and Adoree Jackson is Ross on defense. I only signed Rudolph so the Eagles wouldn’t offer Golladay as much because they didn’t think we could afford him. Jokes on them, I never learned how to do math. Don’t get me started on my main guy, Dimes. His mom must not have warned him about running with his shoes untied. His dad must have skipped the poker lesson about not looking completely bewildered at all times. He also didn’t play pickup football because he holds the ball like a Fabergé egg. The media is honing in on the Yankees and Knicks while I piss away the 2022 cap, and the fans just like to see big names and dollar signs. I’ll do it my way no matter what anyone is reporting. Anyway, we might just still be alright in our trash division and I can get another extension out of the Mara family if we can win more than four games this year. God, I love this country! 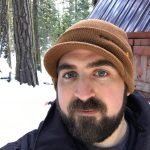