The 2019 Baltimore Ravens: Yeah, I whiffed; we all did 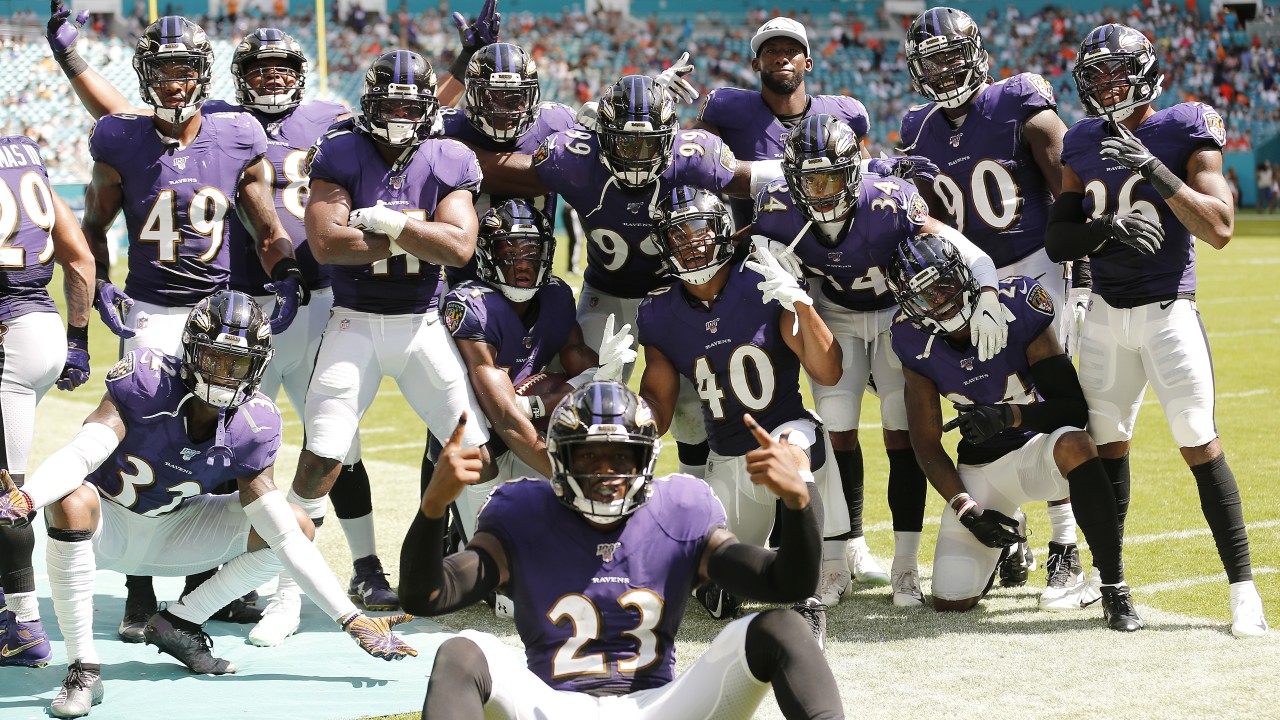 Coming into the 2019 season, the Baltimore Ravens were a team in transition. They officially made the transition from quarterback Joe Flacco after 11 years and countless playoff wins and a Super Bowl title, to the young quarterback Lamar Jackson. They also named Greg Roman the offensive coordinator to help out the quarterback from Louisville. Roman had previous experience working with the likes of Tyrod Taylor and Colin Kaepernick. The team added Mark Ingram, and Marquise Brown to an offense that was going to be this unorthodox style rarely seen in the NFL. The one thing that was needed was Jackson had to improve vastly as a passer.

On defense, the unit was also going through changes. Losing C.J. Mosley, Eric Weddle and future hall of famer Terrell Suggs to free agency. Despite adding Earl Thomas and holding one of the best secondary’s in the NFL, the unit was a giant question mark. Questions at middle linebacker, a pass rush outside Matt Judon and the team had lost stud cornerback Tavon Young before the season due to injury.

Everything with this team, and their schedule, had many feel cautious about them. At best, they were a 7-9 or 8-8 football team. At worst, they were 5-11, where I had them at. With the roster questions, Jackson having to take a big step in his development, and the schedule, the team looked like they were in for a trying season, and no one would’ve blamed them. Little did we know we were in for a ride. However, it didn’t necessarily start out that way. As a matter of fact, it kind of began where we expected.

The Ravens started off 2-2, and other than the Miami Dolphins week 1 blowout where Jackson threw for five touchdown passes, the offense was inconsistent, and the defense was downright dreadful. Kyler Murray even went into Baltimore and threw for 349 yards, something no rookie does. The next week in Kansas City, Jackson struggled with his accuracy and the defense got torched by Patrick Mahomes for a second consecutive year. The following week against the Cleveland Browns was one of the worst losses the Ravens ever had as Cleveland ran all over Baltimore in a 40-25 shocker. After that game, it felt like the tide had turned in the AFC North and again, no one would’ve blamed the Ravens for taking a step back. The next week in Pittsburgh however, changed everything.

While the offense struggled again, the defense stepped up in a big way. Cornerback Marlon Humphrey made the play of the season for Baltimore by forcing a Ju Ju Smith Schuster fumble in overtime, setting up a Justin Tucker game winning field goal to win the game 26-23. If the team was 2-3 and losing to a Steelers team without quarterback Ben Roethlisberger, the morale of the Ravens would’ve been even lower than the week before. At 3-2 however, and with momentum on their side and feeling good about themselves, the Ravens would go on a run of dominance.

Baltimore is currently riding a ten-game winning streak. The offense, other than against the San Francisco 49ers and Buffalo Bills, has been close to unstoppable, Lamar Jackson has been a human highlight reel, and the defense has gone from being one of the worst in the league to one of the best. The defense has been spearheaded by guys stepping up and new acquisitions like cornerback Marcus Peters making big impacts.

That schedule I mentioned before being a factor in my 5-11 prediction? The hardest part was during this win streak. They not only won those tough games, it wasn’t even close. They defeated the Seattle Seahawks in Seattle picking off Russell Wilson for the first time all year. They blew out the Houston Texans, defeated the 49ers and Bills, and the Super Bowl 53 participants? They blew them out by a combined score of 78-27. The win over the Patriots was the moment all of us said “Oh, this team is really good.”

Lamar Jackson, while still having his moments of inaccuracy, and the Ravens having a passing attack ranked in the low-20s, and are at the bottom of the league in passing attempts, has still improved immensely and is probably going to win the MVP. The Ravens rushing attack and offensive line has been the engine of the offense and is the primary reason why it’s the best in the league. The defense’s improvement has been just as impressive to me and you could make a case is a bigger reason they are where they are right now. They have come up with big play after big play during this ten-game winning streak from Marcus Peters’ pick-six off Russell Wilson, the fourth down stops against the 49ers and Bills, shutting down Deshaun Watson and the Texans, to creating and scoring off a Julian Edleman fumble that switched the momentum of that game back to the Ravens.

The Ravens have always been at their best as the underdog. They’ve thrived off of it, and they’ve done it again this season. They knew not many thought they would be a decent team this season, and they set out to prove everybody wrong. Now at 12-2 after another dominate win over the New York Jets, the team is one win away from sealing up home-field advantage in the playoffs. Baltimore has been to the playoffs eleven times in their history, and they’ve never been able to get home-field in the postseason. Ironically, the team that stands in their way is the same team that last defeated them, the Cleveland Browns. Since that game, the Browns and Ravens have gone in completely opposite directions. The Ravens are not a 5-11 team, far from it; they’re a Super Bowl caliber team.