Should The Seahawks Trade Russell Wilson? 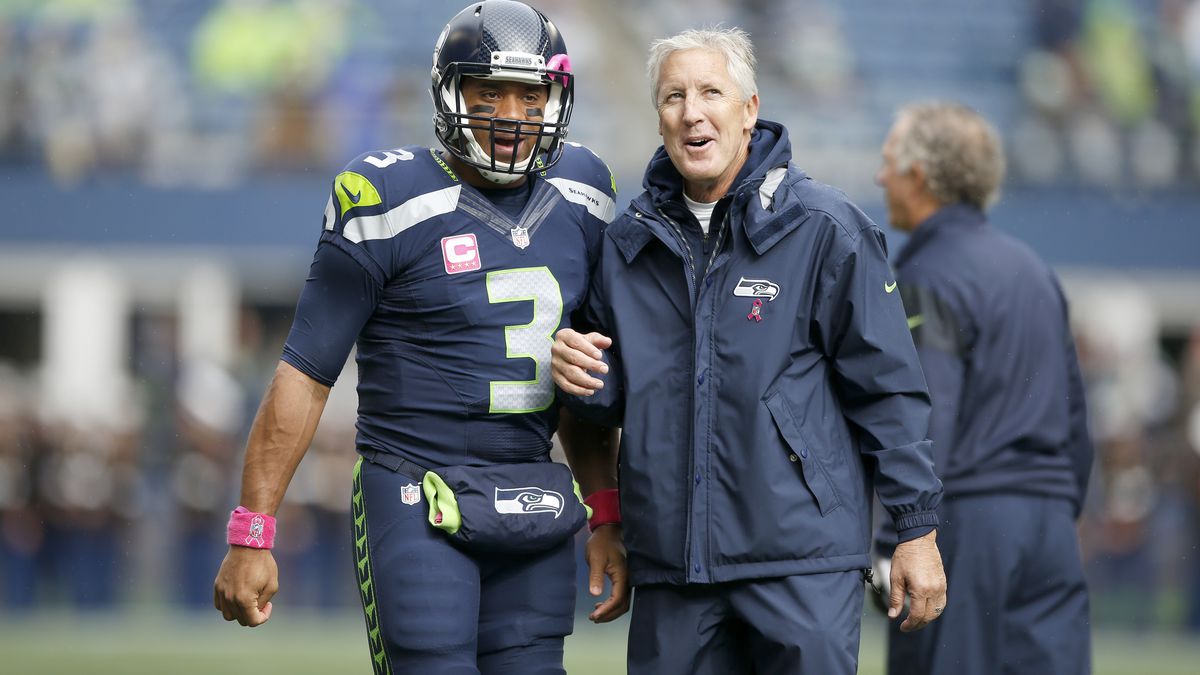 NEW YORK, N.Y.- Have we lost our minds? I understand that the last calendar year has flipped the entire world upside down, but we as football fans still need to hold on to our common sense. As the feuding between Russell Wilson and the Seattle Seahawks plays out, there’s no justification to siding with the organization over one of the best quarterbacks in the game currently. The Seahawks are nothing without Wilson and that if they trade him away, they would surpass the Houston Texans as the most incompetent franchise in the NFL.

Get with the times and realize where your bread is buttered is what I would tell Seahawks head coach Pete Carroll. Carroll’s old school philosophy of playing hard-nosed defense, running the football and not turning it over have produced plenty of wins, including a championship. But as we approach the 2021 season, things are different both on the field and with decision making. Carroll is no longer the most important piece of the franchise and him jettisoning the player most responsible for winning should send the head coach out the door quicker than Russ can say “Go Hawks.”

Let’s straighten one thing out first: Russ’ frustrations were never solely about the offensive line. That unit was a façade as Wilson was speaking more about of the lack of input he’s had in multiple different aspects of the offense, from scheme to play calling to philosophy. Take this anecdote from The Athletic of an incident that happened leading into Seattle’s Week 11 game against the Cardinals.

“Before the Thursday night game against Arizona, Wilson met with his coaches. For some time, Wilson has sought – even pushed – for influence within the organization regarding scheme and personnel. In the meeting, he outlines his own ideas for how to fix the offense. His suggestions were dismissed, another reminder to Wilson that the Seahawks did not see him the same way he saw himself, as a player who had earned greater control over his situation, his future, his legacy. He stormed out of the room.”

As you can remember, Russ was cooking the first half of the season. Through the first seven games of the season, Wilson threw 26 touchdowns to six interceptions as Seattle jumped out to a 6-1 start. The following two games against the Bills and Rams, in which Wilson committed a total of seven turnovers, led to the meeting between coach and quarterback detailed above that left the signal caller miffed. Since that meeting where it was “decided” (more like demanded) that the offense throttle down, Wilson threw just 12 touchdowns to three interceptions the final seven games of the season.

While the turnovers were reduced, so was the potency of the offense. The final eight games of the season (including the playoff game), the offense was neutered, turning the Seahawks from legitimate Super Bowl contender to playoff flop. Seattle averaged just 23.6 points per game after that infamous meeting detailed above, which would have tied them with the Lions for 20th in the NFL in terms of points per game if extrapolated out for the entire season. In a league that’s seen the successful teams pivot to a more aggressive style, Pete still clutches the philosophy of playing not to lose. This has led the team to win games at times in spite of Carroll’s conservative coaching. Carroll is trying to buy a Ferrari but drive it like it’s a Prius. I’m no expert, but I would love to know how handcuffing one of the best quarterbacks in the NFL is conducive to winning.

Now that we’ve outlined the importance of Wilson to winning and why it would be asinine to trade him away, what happens if a trade does go down? How on Earth can Seattle expect to make up the value of losing a top-3 quarterback in the league? With how much of a crapshoot drafting his replacement is, there’s no guarantee that even five first round picks would be enough to equal the value that Russ brings to this organization. Carroll doesn’t want to enter a rebuild, so which quarterback is coming back in a trade that can step in and lead this team to the playoffs? Dak Prescott? Jameis Winston? Derek Carr? Good luck with that.

The NFC West, which was the most competitive division in the NFL in 2020, will become even tougher next season with the Rams acquiring Matthew Stafford, the 49ers getting healthier and the Cardinals making a splash with their signing of J.J. Watt. The only hope of repeating as division champs rests on the shoulders of number three. If he’s anywhere else but Seattle, it’s curtains on any hope of even making the playoffs.

As we look ahead to the upcoming season, the ball is in the head coach’s court to decide whether his ideal principles of winning or actually winning are more important. If wins are truly what he cares about, Russ should be cooking more than a Popeyes employee after their chicken sandwich was introduced. If instead ego wins out and Seattle decides to trade their top-3 quarterback, not only will Wilson be gone, but so will the wins.