SHOULD THE DOLPHINS DRAFT TUA TAGOVAILOA? 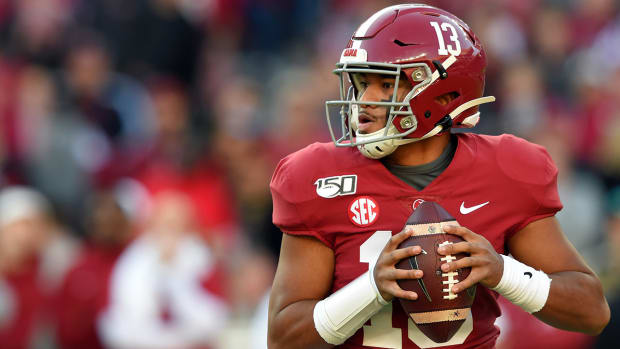 NEW YORK, N.Y.- The Miami Dolphins are finally on the clock. After a year of “Tanking for Tua” and accumulating as many draft picks as possible, they can finally start addressing their needs, starting at the quarterback position. Holding the fifth pick, it seems destined that Alabama quarterback Tua Tagovailoa will be sitting in their lap, waiting to put on the aqua and orange. But now that this day has finally come, the decision is harder than it seems. There is no doubting that the Crimson Tide quarterback has the talent to transcend a franchise. There is very little on the field that Tua does wrong, transforming the SEC powerhouse from a ground and pound team to one that slices and dices defenses with a lethal aerial attack. There is a major flaw with the 22-year-old and that is his health, more specifically, his durability.  Which begs the question: Should the Dolphins trust Tua to be their franchise quarterback?

From a talent perspective, the answer to that question is a resounding yes. Normally, the biggest question marks surrounding quarterbacks heading into the NFL Draft are their physical tools. Do they have a strong arm? Are they accurate? Can they read defenses and analyze information quickly? Can they be a leader of men? At Alabama, he aced all of those questions. The two-year starter amassed 77 touchdowns to just nine interceptions while claiming numerous accolades, including 2018 SEC Player of the Year and was a consensus All-American that same season. He holds the single season touchdown record (43) and is the career touchdown leader (87) in Alabama history.

Equally as impressive as his stats are his leadership abilities. According to The Athletic’s Dane Brugler, Alabama head coach Nick Saban had a very glowing compliment of the quarterback’s effect on the university as a whole.

“Tua has probably had as much of an impact on our program as any player we have ever had,” Saban said. It’s tough to find a compliment that has greater weight than that.

While the on-field accomplishments and leadership say that the Hawaiian native can turn a franchise around, the injury concerns say he can’t be relied upon. The former Alabama star has had more than his fair share of nicks and bruises throughout his two seasons as the starter. During his three years in Tuscaloosa, there were five documented injuries that Tua suffered. Three of these injuries (broken finger in March of 2018, sprained right knee in October of 2018 and left ankle surgery in December of 2018) did not see the signal caller miss a game. The latest two injuries he suffered this past season saw the Heisman hopeful miss a total of four games, including a dislocated hip that ended his college career.

What’s even more alarming is that while five injuries in three years is significant, it’s possible that more setbacks occurred without anyone knowing. Former NFL executive Mike Lombardi reported that on top of the injuries listed above, Tua broke his wrist not once but twice. On the GM Shuffle podcast, Lombardi expanded.

“It’s not just his hip. It’s his ankle. It’s his wrist,” Lombardi said. “He broke his wrist the first day of spring ball one year. And then they fixed it and he came back and he re-broke it again.”

This is of major importance because it could be a precursor to what Dolphins fans could expect in the future if Miami tabs Tua to be their guy. At Alabama, Tagovailoa had great offensive lines in the two seasons he was the starting quarterback. Both in 2018 and 2019, the Crimson Tide were finalists for the Joe Moore Award, an honor given to the best offensive line in the country.

The junior was sacked just 10 times in 2019, while Alabama as a whole allowed the third fewest sacks in the country. In 2018, the Crimson Tide were tied for 12th with just 16 sacks allowed in 15 games. Despite having great protection throughout his college career, Tagovailoa still found himself injured. Looking at what the Dolphins possess on their offensive line, it’s worrisome that the injury-riddled quarterback will be subject to a ton of pressure and will be hit more in one year than his entire college career. Miami allowed the most quarterback hits (147) and tied for first in sacks allowed (58) in 2019, so it’s a stark contrast from the protection Tua was afforded in college to the kind of protection he’ll be dealing with in the pros.

The injury prone label that is being floated around isn’t hyperbole, as NFL teams are legitimately questioning whether the talent is worth the injury risk. Lombardi went on to say that two teams he knew of flunked Tua’s physical not just because of the questions surrounding his hip injury, but because of the total compilation of injuries suffered throughout his career. There is good news concerning his hip injury, as two doctors have said his hip is recovering perfectly and there should be very little worry that his hip will suffer the same fate of Bo Jackson’s. While the hip is encouraging, the fear for the Dolphins should be focused on his ability to stay healthy, not his current health to date.

All of these injuries and serious concerns are enough for me, if I were the Dolphins, to pass on drafting Tagovailoa. There are already examples in the NFL of talented quarterbacks getting drafted to be the franchise leader only to have injuries derail their career. The last thing the Dolphins can afford is to have another Robert Griffin III or Sam Bradford situation. While Tua’s upside is higher I believe than both of those players, the risk is even greater as well. Andrew Luck’s career arc should be enough to give the Dolphins a peek into the future if they draft Crimson Tide star and aren’t able to protect him adequately enough. Even just a year or two behind this extremely porous offensive line could be enough for the already brittle quarterback to never fully recover.

It’s an old cliché, but a very fitting one when it comes to the decision of finding the next elite quarterback. A player’s best ability is his availability, and for Tua, that’s his most questionable feature. It’s why I believe the Dolphins would be better off drafting Oregon’s Justin Herbert or even bypassing the position completely and drafting an offensive tackle. While they might not be getting the player they dreamed of drafting back in September, the good news for the Dolphins is that there are other fish in the sea.