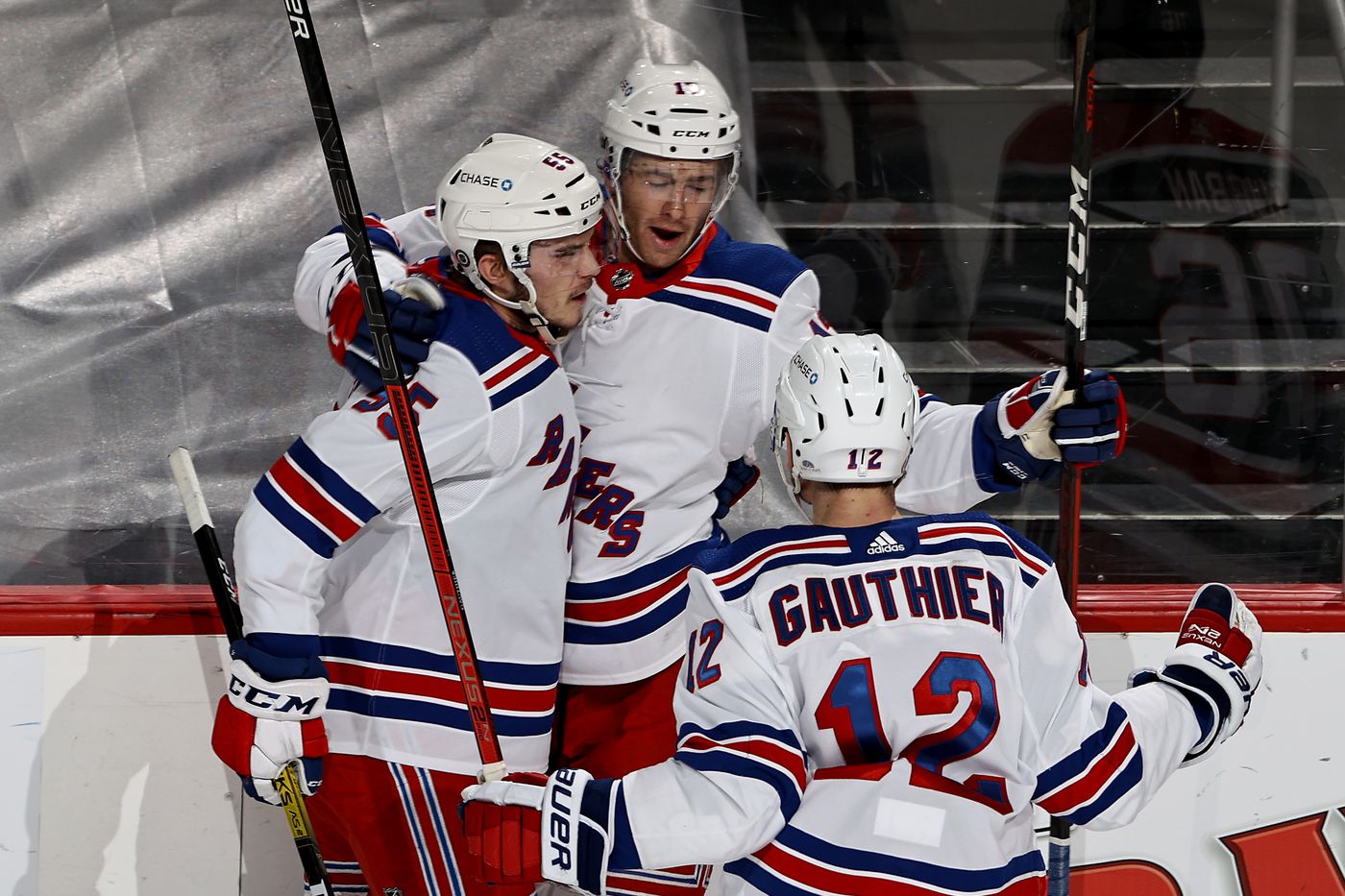 Photo Credit: blueshirtbanter.com
Yes, Sunday night in Pittsburgh was a wash for the Rangers, but let’s not forget what they did to their cross-river rivals in the two games prior. Sitting at 10-10-3, the Rangers are still a young team on the rise. While it would be a big step forward for third-year coach David Quinn to make the playoffs for a second straight season, this is the time to look at the little things the young Rangers are improving on. And what we saw in Newark was their ability to respond.

In the two games against the Devils, the Rangers hit a rut in each game. On Thursday, the Devils controlled the opening frame by out shooting the Rangers 14-6 and dominating in the dot 14-7. New Jersey went into the locker room leading 1-0 thanks to Jack Hughes, but big saves from Igor Shesterkin kept the Rangers in it early.

Heading into period two, the Boys in Blue responded and picked up their goaltender. In a game that could have very easily gotten away from the Rangers, the offense, or should I say Chris Kreider, came to life. 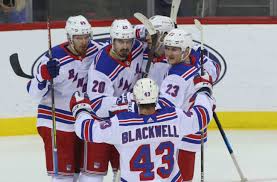 Photo Credit: blueshirtbanter.com
With not one, but two second period goals from Kreider, the Rangers escaped into the second intermission leading 2-1 despite being out-shot 23-12 through two periods. The Devils led in every category except the one that mattered, the scoreboard.

After the response in the second, the Rangers came out in the third and did not give the Devils a turn to respond. Instead, the Rangers kept their foot on the gas. You may look at the score sheet and see a 6-1 final score, but I really meant what I said about the Devils dominating the game except for the scoreboard. New Jersey put up 36 shots on the Rangers who only managed 19, but the Blueshirts made them count. New York tacked on four third period goals from Kreider, who completed his second hat trick in five games, Pavel Buchnevich, Brendan Smith, and Alexis Lafrenière.

The only downer on Thursday’s win was Shesterkin going down with what appeared to be a long-term injury. The hockey gods were on the Rangers’ side the next morning as an MRI revealed only a mild groin strain for the goalie. With a day off on Friday, how would the Rangers come out on Saturday for the rematch?

The Rangers picked up right where they left off Thursday with Adam Fox and Ryan Strome scoring two early goals to give Alexandar Georgiev an early cushion. Fox appeared as though he took the Transcontinental Railroad coast to coast to score on MacKenzie Blackwood.

But when would the moment of resilience for the Rangers come on this afternoon? Like Thursday, it came in the early part of the game. Leading 2-0, the Rangers gave it back to the Devils in the blink of an eye. Goals from P.K. Subban and Mikhail Maltsev 17 seconds apart knotted the score. But this time around, the Rangers did not wait until the middle frame to respond. Heck, they did not even wait for the Devils’ public address announcer to finish crediting Maltsev’s goal.

Former Devil Kevin Rooney put the Blueshirts back in front thanks to a sweet saucer pass from Filip Chytil, who the Rangers could not be happier to have back in the lineup.

Rooney’s goal sent the Rangers into the first intermission leading 3-2 as opposed to tied 2-2. Considering the Devils had tied the game in 17 seconds, the momentum would have been completely on New Jersey’s side going into the middle frame. Instead, the momentum belonged to the Rangers and they carried it through the rest of the afternoon.

Let’s stop for a second and think about the importance of not only the Rooney goal, but the mindset of the Rangers. There have been numerous games this season the Rangers have trailed or been tied going into an intermission. Games earlier in the year against the Bruins, Devils, Penguins, and Sabres turned into losses because the Rangers have not been a good team at winning games late. When heading into the third period tied or trailing, the Rangers are 2-9-1 on the season. Yes, Rooney’s late goal gave the Rangers the lead heading into period two instead of the third, but it was a lead New York would not relinquish.

Just as they did on Thursday, the Rangers added on to the lead once they had it. A second period goal from Libor Hajek and third period goals from Chytil and Strome salted the 6-3 win away for the Rangers. Back-to-back six-goal performances is just what the doctor ordered as the offense finally solved Blackwood after he had beaten the Rangers twice earlier in the season. 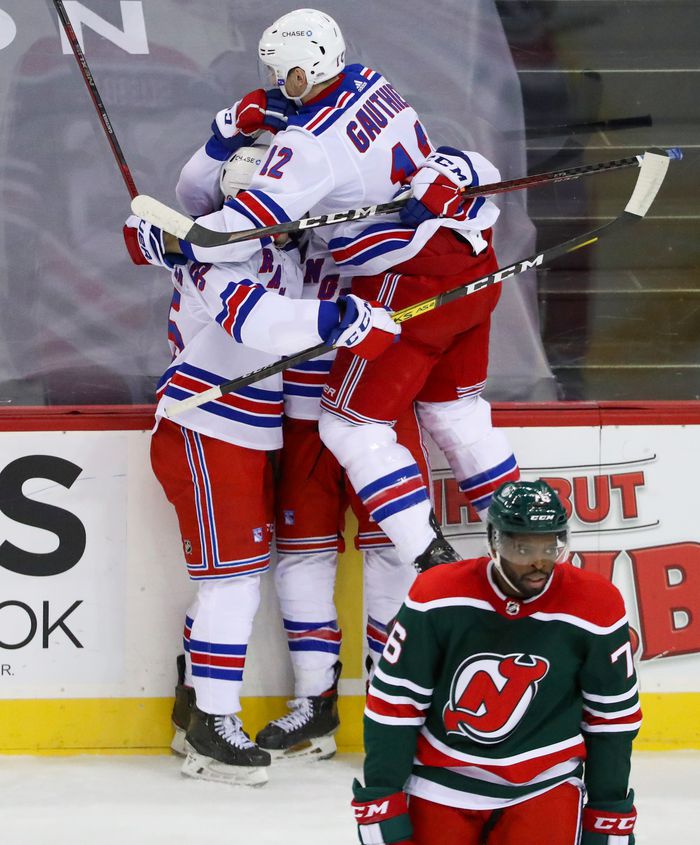 Photo Credit: NJ.com
The victory gave the Blueshirts a three-game winning streak, their longest of the season. No, they could not extend their streak to four against the Penguins, but the rising Rangers took another step up the mountain of team growth with the two wins in Newark.

The Boys in Blue will have another opportunity to show resilience as they face off against the Penguins again on Tuesday in search of their first win in Pittsburgh this season.