There were many dark days for the 1977 Mets, who finished 64-98, with perhaps the darkest day coming on July 13. On a Wednesday evening at Shea against the Cubs, the ballpark and New York City blacked out.

After multiple lightning strikes in the area, Shea blacked out in the bottom of the sixth with Chicago leading 2-1. Mets’ leadoff man Lenny Randle was at the plate when the lights went out, “I thought it was my last day on Earth. I thought God was calling.” Randle recalled.

A native of Compton, California, Randle was used to playing ball in the dark. As the lights went out, Randle swung at the pitch out of instinct and started running after making contact. Running towards second as if the game was still happening, Randle was tackled by Cubs infielders Manny Trillo and Ivan de Jesus.

As the power was going out, Ralph Kiner and Lindsey Nelson were on the radio call for the Mets.

With the game on halt, the Mets were not going to let the 14,626 fans in attendance go bored or hungry. Vendors started handing out free hot dogs, sodas, and ice cream because they would have spoiled in the freezer without power.

Fans had no reason to leave because the subways were not working, and it was obviously dark. Players entertained fans by putting on a light show. What lights could the players possibly have though? Their car headlights!

Mets players went to the players’ parking lot and drove their cars in through the bullpen gate. They just had to be careful of one thing in the bullpen – bullpen coach Joe Pignatano’s tomato garden! Why would a bullpen coach have a tomato garden? In 1969, Pignatano found a wild tomato plant in the bullpen and took care of it the rest of the season. After the Mets won the World Series that season, Pignatano decided to keep the plant around because he saw it as the Mets’ good luck charm. 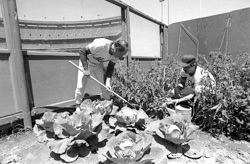 After avoiding Pignatano’s precious plant, the Mets drove their cars onto the field and dimly lit the infield. The entertainment did not stop there though.

Before the fans figured out their respective ways home, Mets players stuck around to sign autographs for the Shea faithful. That is what baseball is truly all about.

As for the power outage, it was restored 25 hours later, but the game was not resumed until September 16. After tying the game in the bottom of the seventh, Jerry Koosman, who originally started the game back in July, gave up two runs in the eighth and took the loss as the Mets went down 5-2.

But see, stories like this are what makes baseball so great. While New York City was blacked out with looting, arson, and violence going on all over the place, 14,626 were at Shea Stadium watching Mets players put on light shows and flashy infield performances all while eating free food.