Rangers Fans Back on their Feet at the Garden 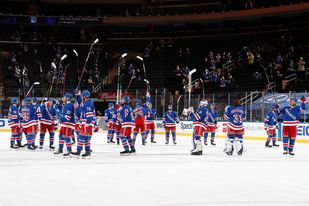 Let’s look past Sunday’s loss for a moment.  Friday night brought us more than just a regular season game in February at Madison Square Garden.  The Rangers welcomed fans back into The World’s Most Famous Arena for the first time since March 7, 2020.  With 1,800 fans in the stands, the Blueshirts put on a Broadway-worthy performance.

Facing off against the Stanley Cup contender Bruins, the Rangers seemed to not fear the team that had already swept them in a two-game series earlier in the month.  After stemming the tide in the early minutes, New York’s offense went to work.

Julien Gauthier fired a shot through traffic which was deflected in by Phil Di Giuseppe to give the Rangers an early 1-0 lead.  It also gave fans a chance to do something they had not done in almost a year: cheer from the stands instead of their couch. 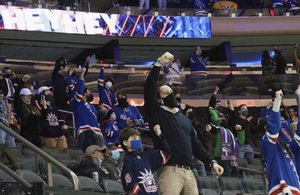 But this is the Bruins we are talking about.  Odds are not in your favor that you will carry a 1-0 advantage all the way home.  Less than two minutes later, the Rangers appeared destined to go up a deuce thanks to highly touted rookie Alexis Lafrenière.  Cutting in on the backhand, Lafrenière tried to score on Tuukka Rask where grandma puts the cookies but just missed off the crossbar.

This was the most important part of the game for the first overall pick.  The 19-year old could have gotten in his own head and been invisible the rest of the night.  Instead, he was quite the opposite.

As the game moved into period two, Lafrenière dished a precise pass through the entire Bruins’ defense over to Ryan Strome.  Strome went short side on Rask to put the Rangers up two as Lafrenière earned his first career apple.  I guess the rookie just wanted to wait until fans were back in the stands to get his first assist by saucing a perfect pass.

Unphased, the Bruins came right down the ice 90 seconds later as Patrice Bergeron cut the Rangers’ lead in half.  The young Rangers bent, but they did not break.  Boston’s seventh-ranked power play was poised to tie it with an opportunity thanks to a roughing call on Brendan Lemieux.  New York’s seventh-ranked penalty kill got the job done and winded the clock towards the second intermission with the lead still in hand.

With 78 seconds remaining in the middle period, the Rangers got a power play of their own after Nick Ritchie tripped Brendan Smith.  Before fans could process the power play chance, Adam Fox, who has been worth those two second-round picks, shot a rocket tipped in by Colin Blackwell.  At this moment, a sense of normalcy was felt.  Sam Rosen excitedly announcing, “It’s a power play goal!” with fans cheering in the background is the sweet sound Rangers fans had been longing to hear.  Pure jubilation.

But wait there’s more.  Before fans could sit down, Chris Kreider, who should keep playing the piano, kept them standing 12 seconds later by firing a shot off Charlie McAvoy’s skate and in. The goal was Kreider’s fourth since his pregame piano show in Philadelphia on Wednesday, spanning five periods of hockey.

Taking a 4-1 lead into the final frame, the Rangers put the icing on the cake with tallies from Pavel Buchnevich and Jonny Brodzinski.  Rangers fans had waited 356 days to watch their beloved Blueshirts take the ice, and the Rangers did not disappoint toppling the Bruins 6-2.

For those wondering, 356 days before Friday’s contest, the Rangers lost to the Devils 6-4.  Not a last memory Rangers fans wanted before the pandemic.  The bright side?  The Rangers’ last win in front of the Garden Faithful came two days earlier when Mika Zibanejad potted five goals including the overtime winner in a 6-5 win over the Capitals.  358 days between games, but back-to-back victorious performances with a six-goal output for the Boys in Blue.

But best of all from Friday was no score or stat.  Friday night was about the fans.  And for the first time in almost a full calendar year, Rangers fans were on their feet at the Garden once again.