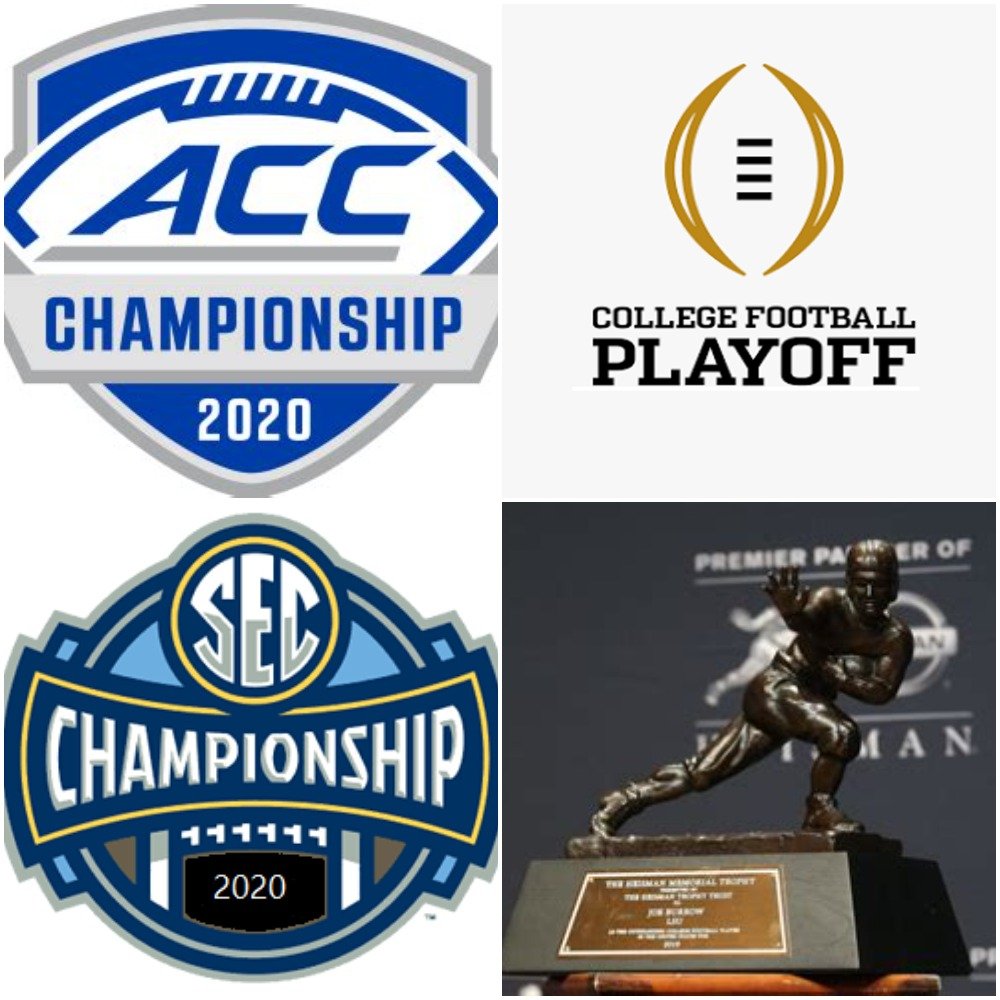 December is upon us! As we imagine a world without
COVID (vaccines coming this week), the College Football world continues to entertain us.

Updated CFB Standings
Since the NCAA puts out their standings on Tuesday, I will put mine out on Sunday. I use my own formula, which I think is more accurate in placing the teams.

Despite their loss to Notre Dame, Clemson’s overall numbers are outstanding. Florida moves down from three to four, and like Clemson, holds destiny in their own hands. As a result of their lackluster performance against LSU, along with playing fewer games than each of the top four teams, Texas A&M’s numbers saw them drop out of the top four.

The “Unofficial” Playoff Round?

Assuming each team finishes their regular seasons without a blemish, these four teams will participate in a pre-playoff playoff. Alabama (1) meets Florida (4), and Notre Dame (2) takes on Clemson (3) on December 19 in the SEC and ACC Championship Games. While the SEC stayed with division winners earning a spot in the conference championship, the ACC instead features the conference’s top two teams.

Barring a massive upset (all four teams are huge favorites in each of their remaining two games), the top four teams in the nation will square off on December 19.

Figuring in likely undefeated programs Ohio State and Cincinnati, would increase that choice. Ohio State, assuming they defeat Michigan State, Michigan and their opponent in the December 19th Big Ten Championship Game, would give them seven wins. How could one justify the Buckeyes inclusion into the College Football Playoff when they played at least three fewer games than all the other qualified programs?

Cincinnati’s undefeated resume appears more complete, as they would finish with ten wins (includes assumed victories over Tusla and their opponent in the AAC Conference Championship Game on December 19th).

One substantial reason for the argument suggesting the College Football Playoffs expand to eight teams in 2020 holds weight looking at the scenario if Clemson and Florida win their conference championship games. Such an outcome (assuming Texas A&M, Ohio State, and Cincinnati do not lose) produces impossible choices for the committee. Texas A&M, Florida and Alabama each would have one loss and hold advantages over the other (Florida over Alabama, Alabama over Texas A&M, Texas A&M over Florida). Clemson and Notre Dame would cancel each other out, making a choice between the two difficult.

The certain number 1 pick in the 2021 NFL draft, Trevor Lawrence, returned to action Saturday after not playing since October 24 due to COVID. Lawrence showed no signs of rust, completing 26-37 for 403 yards and 2 TD in the Tigers’ 52-17 victory over Pittsburgh. In seven games this season, Lawrence registered 319 Pass YPG, 19 TD and 2 INT, 11.1 Pass Yds Per Attempt, while completing 70.6 percent of his pass attempts.

Heisman Takes Shape
Mac Jones set a career-high with five TD, while posting his fifth 300-yard passing game this season, in the Crimson Tide’s 42-10 victory over Auburn. Jones connected with DeVonta Smith on a 66-yd TD pass in the first quarter, along with a 58-yard TD pass which put the game away early in the second half. Smith has 16 TD receptions of 30-yards or longer, in addition to breaking Amari Cooper’s school record for TD receptions earlier this season (31 – Smith now has 35).

Meanwhile, Kyle Trask registered his second-highest career completion percentage (77.8 – min 25 att.), going 21-27, 256 yds, 3 TD, as the Gators moved closer to clinching the SEC East. Both Alabama (at LSU) and Florida (at Tennessee) will make their SEC Championship Game matchup official with a win this weekend.

Two Most Successful Programs Since 1992

The Tide and Gators anticipated matchup in the 2020 SEC Championship Game will mark the 13th division title for each program. This would mark the tenth time these programs would battle each other for the SEC Championship (Alabama leads, 5-4).

Please share and help support my battle against the the long-term side effects affecting cancer survivors battling chronic pain, inflammation and diseases such as Crohn’s Disease, Lymphedema and other permanent illnesses limiting or taking away their ability to work and provide for their family.
All monthly donations go directly towards supporting me and my efforts to establish career opportunites, sponsors and advertisers to help those unable to work due to surviving the destructive long-term side effects of cancer. You can help change a life by donating to either Patreon or GFM. For more info, visit CKMagicSports (.com) and click on Mark’s Story.