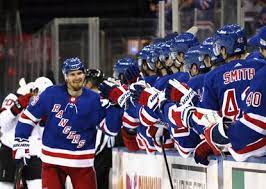 As the saying goes in sports, it is hard to beat a team three times in a row.  Entering Saturday’s matinee matchup at Madison Square Garden, the Rangers had a chance to pull off three straight wins against the Devils.  New York had won the first two games by a combined score of 7-0 behind back-to-back shutouts from Igor Shesterkin.

With Shesterkin back between the pipes, the Blueshirts got off to a fast start thanks to the birthday boy Pavel Buchnevich.  After the Devils tilted the ice early, Artemi Panarin sauced a perfect pass over to Buchnevich to give the Rangers the early 1-0 lead. 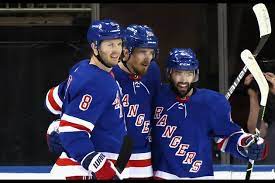 Buchnevich’s 17th goal of the season tied him for the team lead with Chris Kreider, a team lead Buchnevich would take sole possession of just over four minutes later.  After Ryan Strome potted a five on three power play goal to make it 2-0, Buchnevich finished the five on four portion with tally number two on the afternoon. 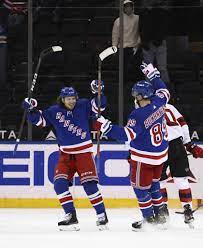 The Rangers appeared to be running the Devils off the ice again after a Panarin goal, but Michael McLeod put New Jersey on the board for the first time in the three games to make it 4-1.  McLeod’s seventh of the season snapped Shesterkin’s shutout streak against the Devils at 199:23. As the game moved into the third period, the Devils kept charging in an attempt to come back from down 4-0 and put a crimp in the Rangers’ playoff chances.

Gray hairs were growing on kids’ day at the Garden.  Back-to-back goals from P.K. Subban and Yegor Sharangovich cut the Rangers’ lead to a skinny goal.  The Rangers had relied on their offense in their 4-2-0 start against the Devils in this season where teams only play regional rivals.  It was the Rangers’ young defense and goaltending that held off the Devils’ barrage in the final frame.  Shesterkin made 10 saves on 12 shots while the defense came up with six blocked shots.

The defensive effort led to the ultimate birthday gift for Buchnevich.  In the final minutes, Lindy Ruff pulled goaltender Aaron Dell for the extra attacker.  Mika Zibanejad gift-wrapped a pass which Buchnevich deposited into the empty net to complete his first career hat trick.  Another empty netter from Kreider sealed a 6-3 victory for the Boys in Blue.

Buchnevich became the 14th player in NHL history and the first Ranger to tally a hat trick on his birthday.  The last player to accomplish the feat?  Nashville’s Viktor Arvidsson only nine days earlier on April 8 in a 7-1 win over the Red Wings.  Buchnevich also joins Wayne Gretzky, who did it twice, as a skater who netted three on his special day.  Any time you can put yourself in the Great One’s company, it is worth bragging about.

Birthday hat tricks are a nice present to give yourself, but there is a greater gift Buchnevich could receive for his 26th birthday: a contract extension.  Buchnevich has stepped up this season with 40 points in 44 games on 19 goals and 21 assists all while being a +13.

A restricted free agent at season’s end it would be wise of the Rangers to keep Buchnevich at 4 Pennsylvania Plaza for years to come.  Let us not forget to give credit to coach David Quinn for Buchnevich’s development.  Since Quinn took the helm in 2018, the 23-year-old left-winger has seen increases in ice time and points. 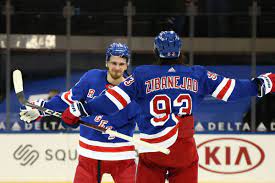 After only 43 points in 74 games in 2017-18, Buchnevich almost matched that point total the following season with 38 in only 64 games.  After 46 points in last year’s shortened 68-game season, Buchnevich is on pace to surpass that this season with 11 games still left to play.

Wouldn’t you know it, Buchnevich’s birthday pixie dust spread to his line mate Mika Zibanejad, who was celebrating his 28th year around the sun.  The fourth and final game was in Newark on Sunday with the Rangers looking for the sweep.  With the game tied 3-3 with three minutes remaining Zibanejad snapped home a birthday goal of his own on the power play to lead the Rangers to a 5-3 victory.

As the Rangers head into Nassau Coliseum to face the Islanders four points out of a playoff spot, they will look to ride the birthday heroics of Buchnevich and Zibanejad to their fifth straight win.  For those wondering, the Rangers are celebrating no birthdays today, but Kreider’s 30th birthday is coming up on April 30.  And no, the Rangers do not play on Kreider’s special day so he will have to choose either April 29 or May 1 to come up clutch and celebrate his big day.  Or why not both days?

The Rangers’ opponent those days?  The Islanders, so any pre or post birthday heroics from Kreider would be crucial in helping the Rangers snag a playoff spot in the East Division.