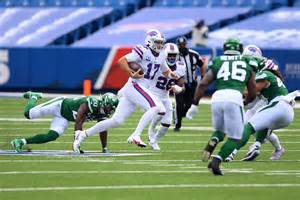 Another disastrous season appears on the horizon for Gang Green, while San Francisco receives a gift from the NFL schedule.

Last week the Jets made Josh Allen look like Barry Allen, as their defense could not contain the third-year QB. New York finished last in Week 1 in opponent time of possession, allowing Buffalo 41:17. New York allowed 98 rushing yards, but 57 came from Allen on 14 attempts (allowed just 41 yards on 18 attempts from conventional running plays).

Both teams should pass the ball much better against each other than their week one opponents. However, the Jets offense does not feature a playmaker such as DeAndre Hopkins, responsible for 56 percent of the receptions and 66 percent of receiving yards against San Francisco.

The 49ers’ weakness against Arizona saw Kyler Murray run past their defense for 91 yards. San Francisco won’t fear the same from the Jets, as Sam Darnold legs rarely earn rushing yards (206 rushing yards in 27 career starts). Without worrying about LeVeon Bell or Jamison Crowder, Nick Bosa should find plenty of chances to impact the game.

On defense, the Jets allowed the Bills to complete 55 percent of their passing plays (10th worst in week one), but no plays 30 yards or more. That allows Jimmy Garoppolo to find receivers underneath coverage. Despite missing both Deebo Samuel and George Kittle to injuries, Jarick McKinnon and Raheem Mostert provided the Niners two big passing plays against Arizona. Brandon Aiyuk makes his NFL debut and should receive multiple opportunities to make it a memorable one.

The Niners’ issues of closing out games haunted them in their Super Bowl loss and Week One. However, Sam Darnold does not possess the weapons and consistency to apply the same result. Look for San Francisco to dominate TOP with consistent high-percentage passes and provide some playing time for their backups late in this fourth quarter.

-The Jets hosted the Niners in their home-opener was 1992. Steve Young threw two TD and ran for another as the Niners opened a 31-0 lead before allowing two Ken O’Brien passing TD in garbage time.

Ken O’Brien’s two late TDs in the 49ers 31-14 victory in Week three of 1992 are the only TD passes for Jets QBs in their last five games hosting San Francisco (163 pass attempts).