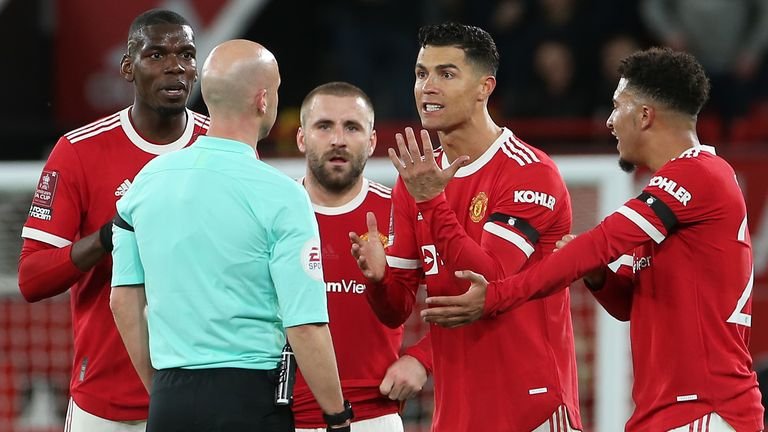 MAY-DAY(Photo from SkySports) [Manchester United players surrounding the referee]
With a tragic and disappointing season coming to an end after a start with such prestige and promise, Manchester United can now only hope they can secure European football in the Europa League Cup competition for next season. The red devils are approaching their worst ever Premier League points total if they win out the final three games of the season. In the past, the lowest points total came in the 2013/14 season when they accomplished 64 points under then manager David Moyes. After the start that United had to the season, how did it all go so wrong?

August 14, 2021, when United thrashed arch-rivals Leeds United at Old Trafford by five goals to one looked like the start of something special. The unveiling of one of the most decorated defenders in the world Raphael Varane, the debut of English wonderkid Jadon Sancho, world cup winner Paul Pogba providing an assist to four of the five goals, and Bruno Fernandes scoring a hattrick. These were special times. Things got even more exciting when it was reported that Cristiano Ronaldo would be making a sensational return from the Italian side Juventus.

However, all these things somehow got awful. Many different reasons could be eluded to, whether it was the non-continuity of the team, inept playing style without an identity, or even a lack of effort but one thing was for certain; it could not continue. 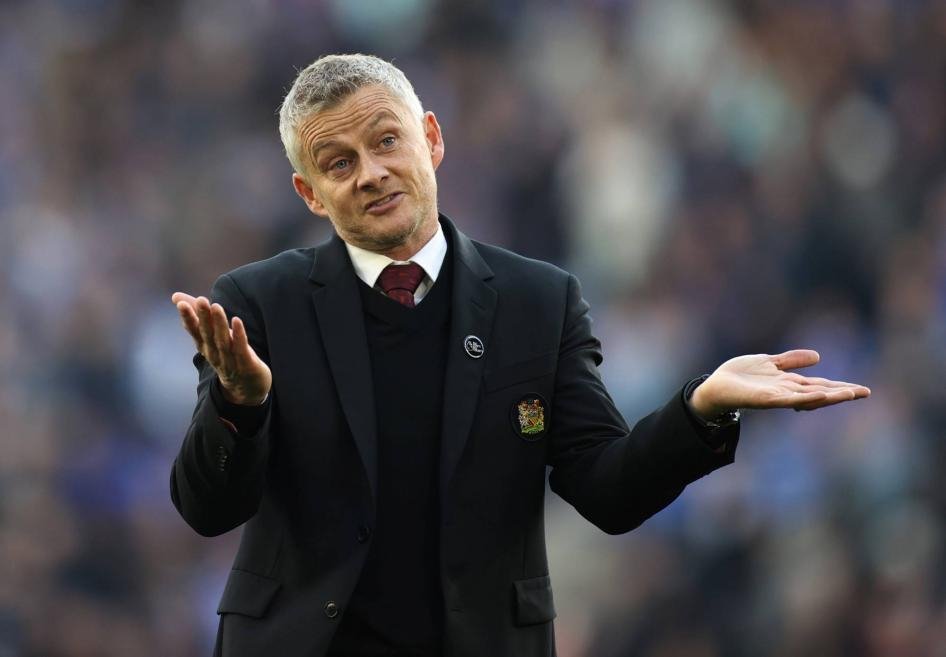 (Photo from REUTERS) [Ole Gunnar Solskjaer]
Following humiliating losses to Liverpool (5-0), Manchester City (2-0), and Watford (4-1), the club parted ways with the manager and club legend Ole Gunnar Solskjaer in November. The club was at an all-time low. Bad morale, news being leaked, the works. The board at United was quick to try and appoint a new permanent manager, but when their approach for PSG boss Mauricio Pochettino was rejected by the club, they ended up hiring German coach Ralf Rangnick on an interim basis with a two-year consultancy role as part of the board at the end of the season.

With the godfather of “gegenpressing” now in charge, fans were positive hoping to see similar playing styles to the likes of Liverpool and Chelsea, both of whose coaches were mentors of Rangnick. That was far from the case. Only a select few got to grips with it without issues and even though those players weren’t the best, they gave 110% on the pitch. The other “talented” players couldn’t give a damn and just made the dressing room even more toxic.

Rangnick spoke in press conferences about how a revolution is needed at the football club, stating that United doesn’t have the quality footballing department as compared to the current top three (Man City, Liverpool, Chelsea) and even said for any new permanent manager, this job would be like “open-heart surgery.” 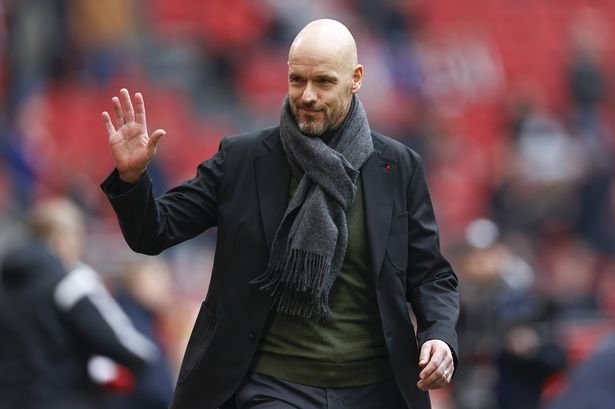 (Photo from Getty Images) [Erik Ten Hag]
It has since been reported that the manager of Ajax Amsterdam Erik Ten Hag will become the new manager of Manchester United on a three-year deal. The 52-year-old will take charge at the end of the season, and is fully focused on Ajax with the club in a title race in the Dutch first division; the Eredivise. The former centre-half has a very good record managing Ajax winning 157 out of 212 games managed since 2017.

This will be a really difficult job to find a new identity at Manchester United and it could take time. The club is going through another season without a trophy, last lifting one in 2017 so frustration could creep in after the first year but patience is key. In all fairness, Ten Hag, Rangnick, and the newly revamped recruitment team have a lot of issues to work out.

The team has around six players who are out of contract this offseason. They are Jesse Lingard, Paul Pogba, Lee Grant, Nemanja Matic, Edinson Cavani, and Juan Mata, with players such as Phil Jones, Eric Bailly, Aaron Wan-Bissaka, and Dean Henderson looking for moves to get regular game time. With an exodus like that, the club must be looking to sign about four or five players in the summer transfer window. This season was a nightmare for United fans all around the world but there were some positives. 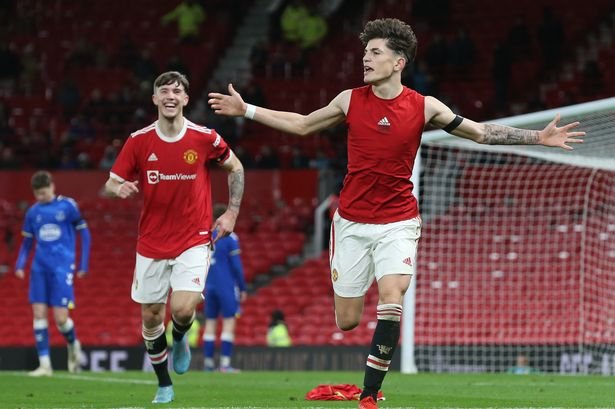 (Photo from Manchester Evening News) [Charlie McNeill and Alejandro Garnacho (right)]
With the emergence of youth players such as Hannibal Mejbri, Anthony Elanga, Alejandro Garnacho, and Zidane Iqbal just to name a few, development over the next 18-24 months will be instrumental in the future success of the team. These players though inexperienced will have to buckle down and apply themselves to the new manager to ensure the team continues on an upward trajectory.

The Red Devils haven’t had a recognized holding midfielder that can play twice a week since Michael Carrick retired in 2018. That position has been neglected for years and cannot be avoided in this window. With the upcoming arrival of James Garner from his loan spell at Nottingham Forest, the team has a ready-made gem to look forward to.

(Photo from The Peoples Person [Harry Henshaw]) [James Garner]
Garner has had a successful loan spell, to say the least. Having produced 4 goals and 8 assists in 39 appearances, and making multiple teams of the week, Garner should be a contender to be the driving force in the midfield going forward, without having to spend. Reports over the last year have linked West Ham’s Declan Rice to a move to Old Trafford, but with a valuation of over $100 million, it is unlikely the deal gets done.

If United feels James is not ready for Premier League football, alternative options could be Wolverhampton’s Ruben Neves, Monaco’s Aurelien Tchouameni, and Leeds’ Kalvin Phillips. A scout was sent to Wolverhampton’s latest game to gather more info on Neves as a transfer gradually looks increasingly doable. As reported by Jonathan Shrager, Phillips would prefer to sign a new deal at Leeds and would find it hard to join Manchester United because of the rivalry between the clubs. When it comes to Tchouameni, he looks to be bound for Real Madrid even though he is “tempted” by a PL move. 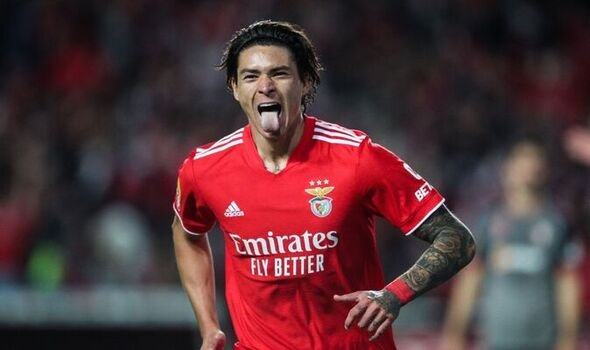 (Photo from Getty Images) [Uruguayan Striker Darwin Nunez]
United are also reportedly interested in a young striker with Cristiano leading the line at 37, and Mason Greenwood’s future uncertain, names being linked are Darwin Nunez from Benfica and Jonathan David from Lille. A right-sided forward and a central defender are also on the agenda with Pau Torres being linked to the reds yet again. A fullback may also be prioritized but Rome was not built in a day, so some work will have to take place in future windows.

As stated earlier Ten Hag will have a mammoth job to make this team the force it once was, being the winningest team in PL history. A style of play and philosophy will need to be implemented during the preseason tour and a group of players that can be trusted to execute and give 110%. It will be an interesting summer for this group, especially since this is sports and anything can happen.