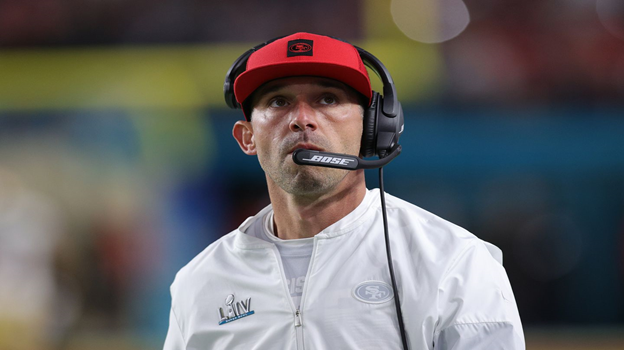 Did the Kansas City Chiefs win the Super bowl or did Kyle Shanahan give it to them? We can go on and on about who was to blame for the San Francisco 49ers loss in Super Bowl 54 Sunday to the Kansas City Chiefs. Lots of factors played into it, and of course will give the credit to Patrick Mahomes and company. But the guy who should be at the head of the blame game table belongs to the head coach. Shanahan has now been on the wrong end of two of the biggest comebacks in Super Bowl history. He was the offensive Coordinator for the Atlanta Falcons debacle where they blew a 28-3 loss to the New England Patriots, and the Falcons have still never recovered. People said he got to conservative and didn’t do enough to win when New England grabbed momentum. Super Bowl 54 played out the same way.

Let’s start with clock management. Right before the half, the 49ers defense had gotten Mahomes and the Chiefs to punt the ball. With all three timeouts left, Shanahan decided let’s not use them. What was he saving them for? He had over a minute left on the clock to make something happen. Jimmy Garoppolo had been dominant in the two minute offense all year. So why all of a sudden change up what made you successful? They wound up throwing a deep ball to Tight End George Kittle, but was called back for a questionable offensive pass interference. After that Shanahan said he was content going into the half tied at 10. Even his GM John Lynch was showing signaling for Shanahan to call for a timeout. What does that tell you?

Not having the confidence in his offense was on display when his team had momentum and on a fourth and two, he decided to kick a field goal to go up 13-10 rather than going for it. His running attack had been thriving for the game and they had two very reliable backs in Raheem Moster and Tevin Coleman, not to mention a strong, and likely best fullback in the game in Kyle Juszcyk. Even doing trickery with Deebo Samuel would’ve been wise. The 49ers had plenty of options. So why not go for it and keep the ball in your offenses hands rather than give it back to Mahomes and keep Kansas City in the game? You had a chance to end it early, but instead you kept the Chiefs in the game.

RUN! RUN! RUN! That should’ve been the advice Shanahan should’ve been giving his offense. Instead as the running attack had done well all game, he put the ball in Garappolo’s hands. I thought he could handle it, but didn’t think Jimmy G had to even throw it. He didn’t play his best game and when the score was 20-17, Mostert got a five yard run on first down and instead of continuing to dominate on the ground and chew up more clock, and he elected to let Garoppolo throw it. Incomplete passes would only stop the clock and let Mahomes have his moment. The last two drives were a disaster for the 49ers. By the time Shanahan had confidence in his quarterback, the team lost all momentum. Two weeks ago, in the NFC Championship game, against the Green Bay Packers the run worked. So why all of a sudden are you jumping off of something that was helping?

Many other reasons unfolded, such as the 3rd and 15 completion against the stacked Niners defense, or Garoppolo missing Emanuel Sanders wide open at the end of game. Missed tackles played a role for the Niners defense too. You can also blame the refs for plenty of missed calls. But the one truth remains, and that’s Kyle Shanahan once again chocked away another Super Bowl. The 49ers will be back, but can this guy be the leader to a championship? We shall see.