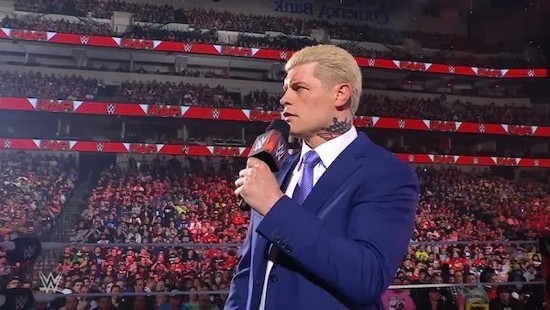 For the Past few years WWE World Wrestling Entertainment has struggled on their flagship show Monday Night Raw. WWE Raw has gone from 4 million viewers to 1 or 2 million viewers a week.

Recently Cody Rhodes made a surprise appearance at WrestleMania 38 in Dallas cementing himself now apart of The WWE roster. Cody defeated Seth Rollins at WrestleMania. For the past six years since leaving WWE Cody has competed around the world in multiple companies before joining the AEW All elite wrestling franchise in 2020.
Now that Cody is back where it all began for him the interesting dynamic is with the talent that Cody has on the microphone & in the ring is it enough to help the Flagship show regain the popularity & viewership that it has lost?

Cody Rhodes is one of the most influential people in the wrestling world right now because of what he Did In AEW & helped AEW take shape into the show that it is now. With the amount of knowledge gained & learned from AEW owner Tony khan Cody could use that to his advantage to help The WWE grow in its product & weekly shows that have struggled week in & week out because of the lack of strong storytelling & interesting segments.

Cody being there will inspire the talent to go more above & beyond & even take advice from him because in order to have television success in viewership & demographics there has to be a big push for the whole company.

With Cody being on Monday night raw it will help the show grow in the momentum that lacks & put WWE somewhat back on the map that it has longly needed. There are endless possibilities for matches, segments, & storytelling with The American Nightmare who may be on path to become the next WWE champion.