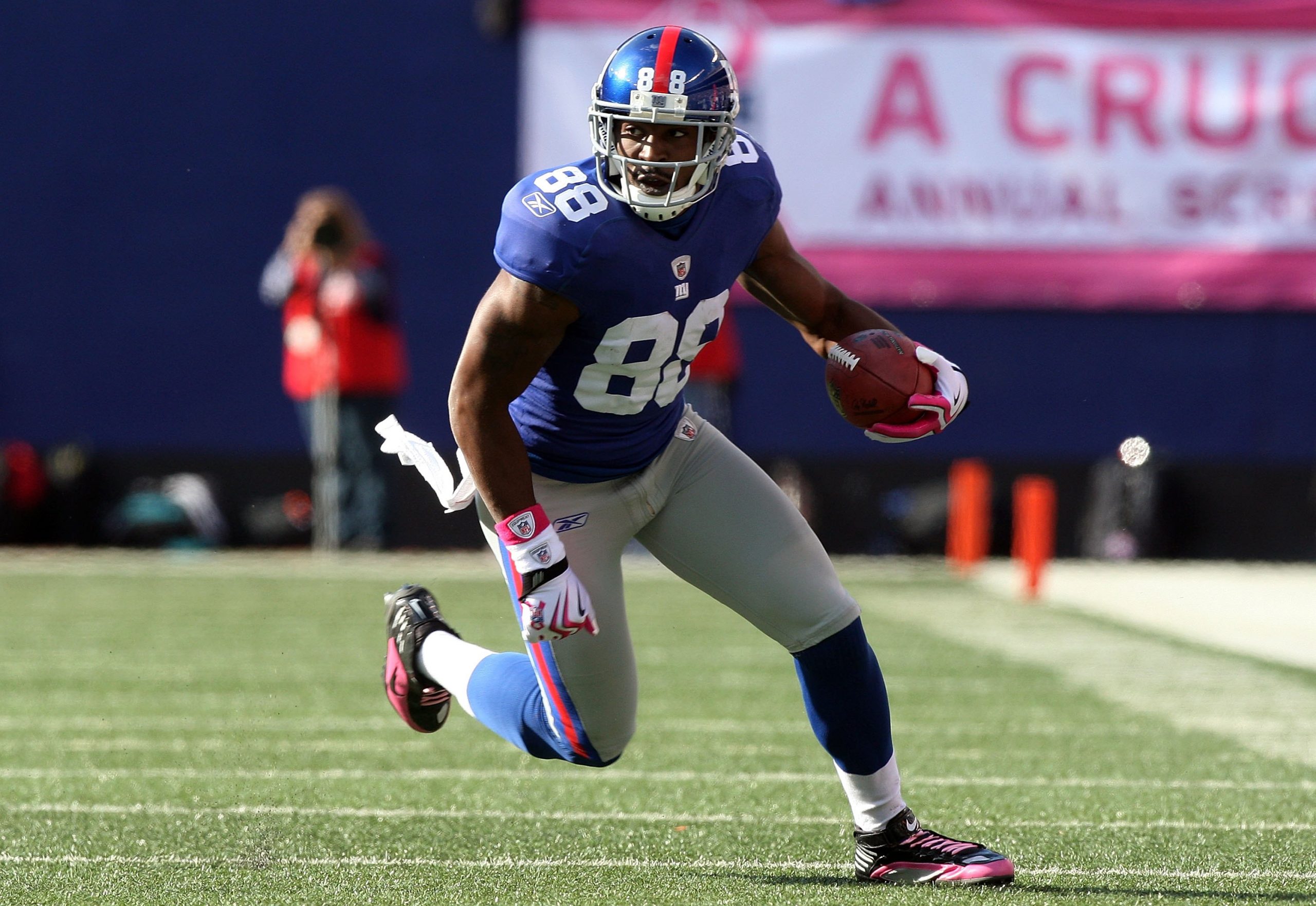 Founded in 1925, the New York Giants are a storied franchise with greats spanning time from Frank Gifford and Y.A. to Michael Strahan and Eli Manning. With eight total NFL championships under their belts, the Giants clearly have had multiple deep teams. On those championship teams, several players have flown under the radar while helping Big Blue to a title. The Giants’ last championship came with a Super Bowl XLVI win over the New England Patriots. A playoff run that could not have been completed with the astute receiving abilities of Hakeem Nicks.

Drafted by the Giants 29th overall in the 2009 NFL Draft, Nicks was thrown right into the fire of New York’s young receiving corps. Alongside Kevin Boss, Mario Manningham, and 1,200-yard receiver Steve Smith, the 21-year old rookie chipped in 790 yards of his own along with six touchdowns. Averaging 16.8 yards per reception on 47 catches, Nicks was a key part of the Giants’ eighth-ranked offense which averaged 25.1 points per game.

While the offense was sailing along, the defense had its struggles in 2009. Struggles that ultimately kept Nicks and the 8-8 Giants out of the playoffs. Big Blue’s offensive prowess was overshadowed by their defense, which was ranked third worst in the NFL.

Heading into 2010, Nicks entered his sophomore season looking to expand his role in the offense, and he certainly did. The 22-year old was Eli Manning’s right-hand man with 79 receptions. Nicks also led the Giants in receiving yards with 1,052 and in touchdowns with 11, a career high. Let’s go a step further and put these numbers into context.

Manning threw for 4,002 yards and 31 touchdowns in 2010, which means Nicks was responsible for more than a quarter of the Giants’ receiving yardage and more than a third of their receiving touchdowns that season. Nicks’ numbers were not close to being matched by other Giants receivers. Boss was second in receiving yards and touchdowns with 531 yards and five touchdowns. In only year number two, Nicks had become the go-to guy. 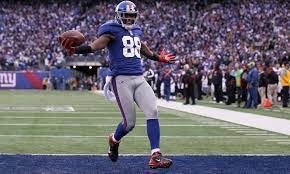 Manning’s top target also ranked amongst the NFL’s best in 2010. Nicks’ 11 touchdowns were tied for fourth in the league, putting him right behind Calvin Johnson and Greg Jennings who caught 12 touchdowns. Dwyane Bowe led the league with 15 touchdowns receptions.

Nicks’ superstar season also got him ranked in the top 15 in targets, receptions, and yards. Despite being a top pass-catcher in 2010, Nicks fell short in the vote count and missed out on a trip to Miami for the 2010 Pro Bowl.

A possible reason for Nicks missing out on a Pro Bowl selection? The Giants collapsed in 2010 and missed the playoffs despite a 10-6 record. New York had the NFC East title in front of them, but a certain Week 15 meltdown at the Meadowlands against the Eagles sent the Giants’ season spiraling downward.

As it turned out, blowing a 31-10 lead to the Eagles with 8:17 remaining was just the chip the Giants needed on their shoulder for the 2011 season. Coach Tom Coughlin preached the importance of finishing all season long and Nicks held up his end of the bargain.

The third-year receiver put up a career high in receiving yards with 1,192, which was second on the team to Victor Cruz’s 1,536. Cruz also became the Giants’ leading touchdown receiver with nine, but Nicks was right behind him with seven. Cruz and Nicks proved to be the dynamic one-two receiver punch Manning needed. Manning had a career year throwing for 4,933 yards and 29 touchdowns with a 61% completion percentage. Of Manning’s 359 completions, Nicks hauled in 76 of them.

As the 2011 season wound down, the Giants again found themselves in the thick of the NFC East race. The season’s final regular season game featured the 8-7 Dallas Cowboys and the 8-7 Giants at MetLife Stadium on Sunday Night Football with everything on the line. The winner would claim the NFC East crown, and the loser would head home.

New York jumped out to a quick 21-0 lead thanks to a 74-yard touchdown pass from Manning to Cruz and a rushing and a receiving touchdown from Ahmad Bradshaw. The Cowboys cut the Giants’ lead to 21-14 with two Laurent Robinson touchdown receptions from Tony Romo in the second half. After the Giants tacked on a field goal to go up two scores, it was Nicks who put the icing on the Giants’ NFC East title cake. 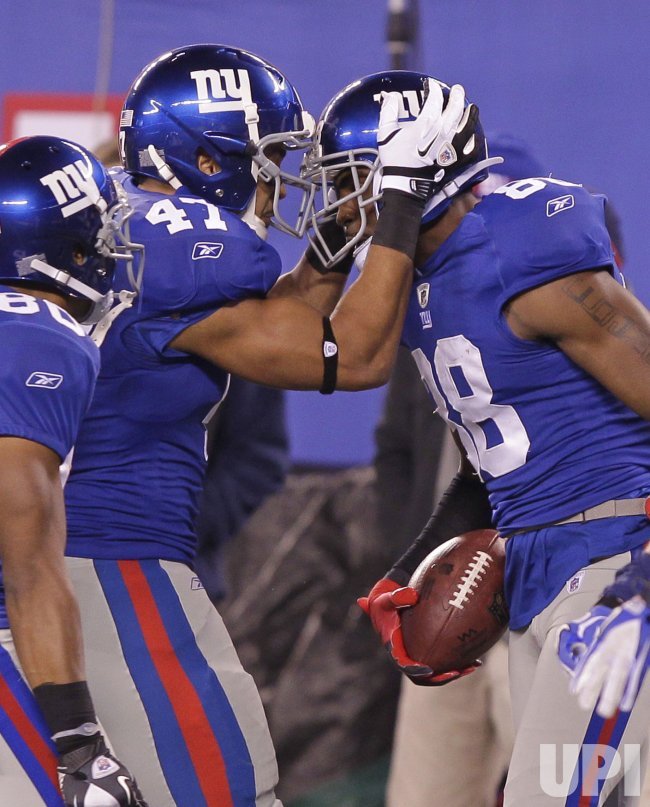 The Giants defeated Dallas by that same 31-14 score to return to the playoffs for the first time since 2008. This was of course when New York ran the table on the road and beat the 18-0 Patriots in Super Bowl XLII. With a receiving corps headed by Nicks and Cruz, the 9-7 Giants looked to go on a magical playoff run again.

This time around as a division winner, the Giants got a home game in Wild Card Weekend against the Atlanta Falcons. Nicks and the Giants had the Falcons flying back down south for the winter.

The Giants cruised past the Falcons 24-2 and got themselves a date with the 15-1 Packers at Lambeau Field. Green Bay beat the Giants 38-35 in Week 13 at MetLife Stadium to keep their perfect season intact at the time. Some thought the Giants would need a Hail Mary to take down the Packers. As a matter of fact, the Giants had their Hail Mary prayers answered and then some by who else? Hakeem Nicks.
Nicks’ seven catches for 165 yards and two touchdowns led the Giants’ 37-point barrage on the Packers as the Big Blue defense held the NFL’s number one offense to 20 points. On to San Francisco.

The Giants were halfway home to their fourth Lombardi Trophy. The San Francisco 49ers, another team the Giants fell to in the regular season, were the only thing standing in New York’s way of a Super Bowl rematch with the Patriots.

In what was a trench warfare type of game in the mud and rain at Candlestick Park, it was a defensive battle all night. Nicks was held to five catches for 55 yards, but the 49ers couldn’t bottle up both Nicks and Cruz. Cruz hauled in 10 passes for 142 yards, while Manning found Bear Pascoe and Mario Manningham for touchdown passes. Nonetheless, it was a 17-17 tie as the NFC Champion would be decided in overtime.

In sports, we often hear how you need the ball to bounce your way. That is exactly what the ball did for the Giants in the extra frame. Steve Weatherford’s punt bounced off returner Kyle Williams’ knee and the loose ball was recovered by Devin Thomas of the Giants in prime field goal range.

Lawrence Tynes trotted out in the soppy conditions and knocked the game-winning 31-yard field goal through the uprights to send the Giants to Indianapolis with a 20-17 win. It was Nicks’ first Super Bowl appearance. 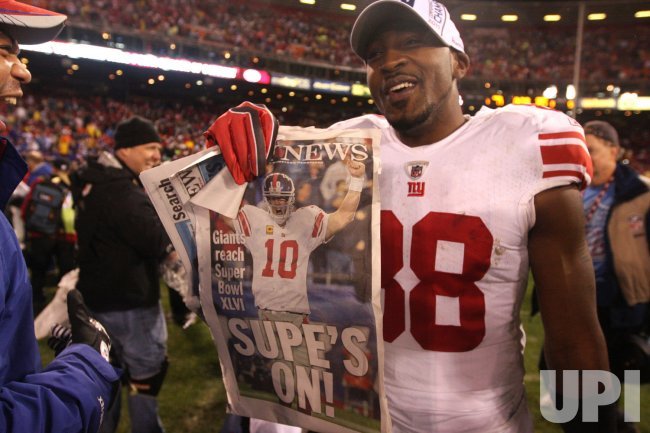 Football’s February finale saw Giants vs. Patriots II. The Giants were looking to become the first 9-7 team to lift the Lombardi Trophy with the 13-3 Patriots standing in their way. Big Blue already beat Tom Brady and Bill Belichick up in Foxboro in Week 9 24-20 thanks to a last second touchdown catch from Jake Ballard. Twelve weeks later, the Giants were looking to come out on top again.

As had been the case all season, it was Cruz and Nicks getting it done for the Giants’ receiving game. After a safety and a Cruz touchdown catch gave New York an early 9-0 lead, New England responded with 17 straight points.

Trailing 17-9 in the third quarter, Manning leaned heavily on number 88. Nicks made key catches on back-to-back drives that both ended in Tynes field goals to cut the deficit to 17-15. Super Bowl XLVI headed to the fourth quarter with that same score, and it almost stayed that way until the Lombardi Trophy presentation.

After Wes Welker dropped a Brady pass that could have iced the game, Manning of course started the ensuing Giants drive with the sideline dime to Manningham. As the two-minute warning approached Manning who else, Nicks, for 14 yards down the middle to put the Giants in prime field goal range at the Patriots’ 18-yard line only trailing by two.

The Giants approached the endzone with still plenty of time for a potential response from Brady. As it turned out, it was a go-ahead field goal Tynes never kicked. After Nicks was forced out of bounds on a first down reception, Bradshaw sat down in the endzone with 57 seconds remaining to put the Giants in front 21-17.

Big Blue’s defense held off Brady and the Patriots to secure the Super Bowl. It was the Giants second Super Bowl win over the Patriots in four years. As someone who was not around four years earlier, Nicks reached football immortality for the first time, and finished as the game’s leading receiver with 10 catches for 109 yards. In the four-game playoff run, Nicks proved to be the Giants’ most valuable receiver. He hauled in 28 passes, a team high, for 444 yards and four touchdowns, both also team highs. 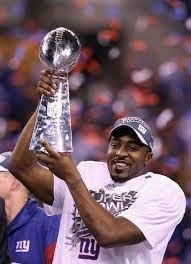 2011 would be the first and only time Nicks would climb to the top of football’s mountain. The 2012 and 2013 Giants missed the playoffs, but Nicks still racked up receiving yards. Although he only found the endzone three times over the next two seasons, Nicks compiled 1,588 yards on 109 receptions.

Nicks closed out his seven-year career with a stop in Indianapolis in 2014 where he bounced back with four receiving touchdowns.

Nicks would go on to be waived by the Titans before returning home to the Giants in 2015 for six games.

He did not have the longest of careers, but you cannot talk about the success of the early 2010s Giants without saying Hakeem Nicks’ name. A dynamic route runner who always racked up yards after the catch and converted third down after third down. So next time you go to MetLife Stadium, do not be surprised if you see multiple Giants fans donning a Nicks number 88 jersey.