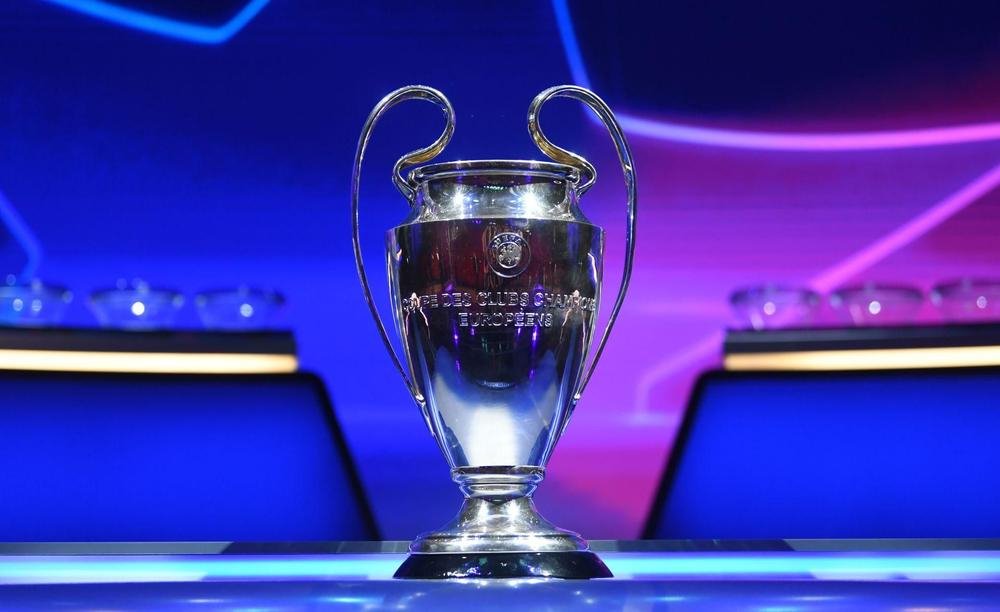 The stage is set. May 28, 2022, in the Stade de France in Paris. Liverpool vs. Real Madrid, La Liga vs. The Premier League, Klopp vs. Ancelotti, Benzema vs. Salah, we are in for possibly one of the greatest UEFA Champions League (UCL) finals in history. How did both teams conquer an array of European oppositions to make it to the pinnacle of cup competitions? Let’s take a look.

Liverpool began the campaign in group B of the 32-team competition, going up against the likes of Atletico Madrid (Spain), Porto (Portugal), and AC Milan (Italy). Historically, the names of the teams would make it seem to be the group of death, but this was far from the case. Liverpool made light work of the oppositions, winning all six of the games with an aggregate score of 17-6. 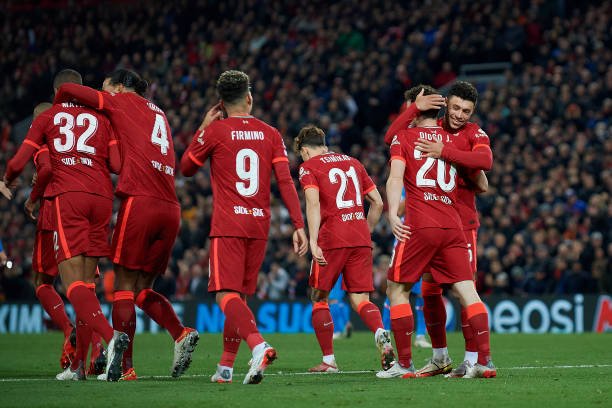 (Liverpool players after a goal against Atletico Madrid)
For Real, it was a bit more challenging, with a loss to FC Sheriff (Moldova) by 2-1 in Spain. Apart from that blemish, Los Blancos went unbeaten in their other group games against Inter Milan (Italy) and Shakhtar Donetsk (Ukraine), with an aggregate score of 14-3. Defensively more sound when it comes to the concession of goals, however, that one loss tarnished that reputation

When the knockout stages began, Madrid drew Paris Saint-German (France) in the round of 16, while Liverpool got Inter Milan. It was a PSG vs Madrid clash in France for the 1st leg, with the Parisians coming out on top by 1-0, scored by future Real forward, Kylian Mbappe. They were dominated. Marco Verratti ran the show, stifling Madrid from starting/continuing attacking build-ups, but it was all to play for at the Bernabeu. 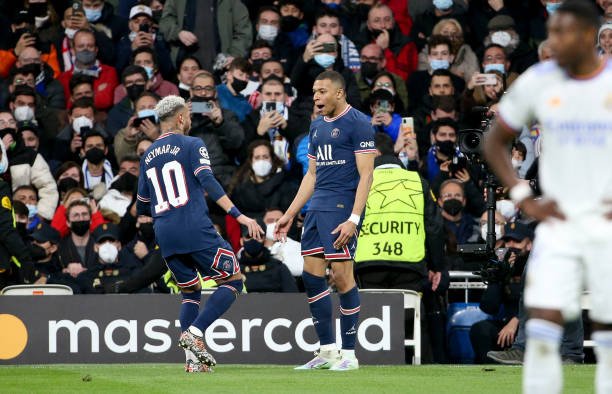 (Kylian Mbappe celebrates with teammate Neymar Jr)
Liverpool on the other hand made light work of Inter dispatching them 2-0, and were by far the better team, with Inter not even registering a shot on goal. Mo Salah and Roberto Firmino got the goals in Milan and the tie never looked in doubt for the reds. In the reverse fixture on Merseyside, Inter was victorious 1-0, however, when the Italians were pushing for an equalizer, Alexis Sanchez got sent off for two yellow card offenses, leaving his team a man down and less likely to produce an attacking outburst.

What happened to Madrid after being outplayed in the previous encounter? Karim Benzema. After going behind again in the game to another Kylian Mbappe goal, things got tense. After an inspired substitution by Carlo Ancelotti to replace Toni Kroos with Eduardo Camavinga, everything clicked. Karim Benzema scored a 15-minute hat-trick to turn the tie on its head. The final whistle blew to the delight of the Spaniards winning the match 3-1, and 3-2 overall. 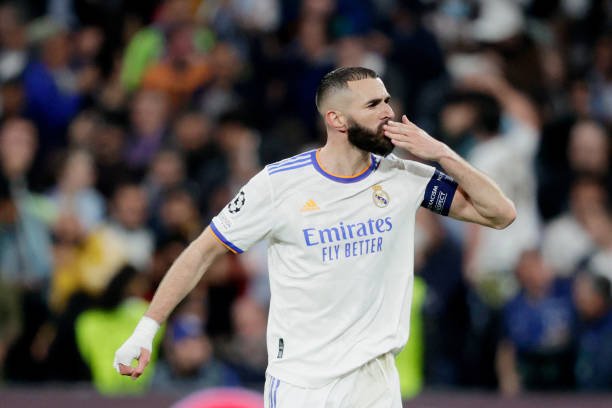 (Karim Benzema)
Into the Quarter Finals both teams go, Liverpool has drawn against Portuguese team Benfica, while Real was drawn against defending champions, Chelsea. Both the Reds and Los Blancos ran out 3-1 winners, making the 2nd leg much easier. Real however were shocked by Chelsea as they ran out to a 3-0 lead, but when Luka Modric played the assist of the season to Rodrygo, we had an extra thirty minutes. In extra-time it was that man again; Karim Benzema scored to give the Madridistas the overall lead, which eventually gave them the victory.

In the game at Anfield, Benfica scored 5 goals. Unfortunately for them, two were offside which meant they were disallowed. Liverpool never gave up and scored three of their own to give an end to an enthralling game. Next up: the semifinals. Liverpool vs. Villarreal in one and the other consists of English champions Manchester City against the newly crowned Spanish champions Real Madrid.

Villarreal, or as they are commonly known as, the Yellow Submarine, was a pushover losing 2-0 to Liverpool for them to have one foot in the final. In the other semi, it was end-to-end, leaving fans, pundits, and commentators breathless alike. City ended up with the advantage of 4-3, but as previously shown in the competition, Real Madrid is never out.

As expected Liverpool put both feet in the final with a come from behind 3-2 win. A bright start to the game was not capitalized on by the Yellow Submarine as they crumbled in the 2nd half and conceded three goals in 12 minutes, crashing out of the final four. 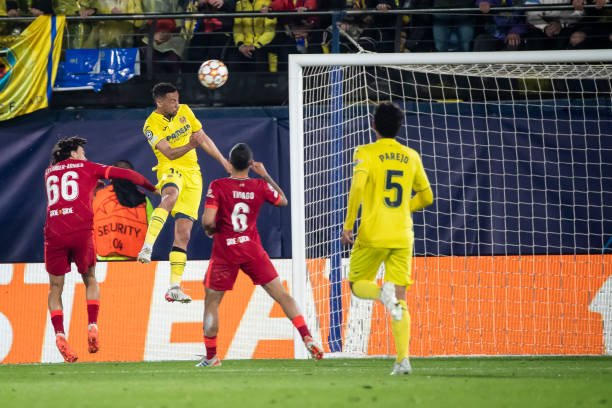 (Villarreal’s Francis Coquelin rises to score a header)
The game of the tournament between Madrid and the Citizens lived up to the anticipation. More of a chess match than the 1st leg, Man City kept most of the ball, while Madrid had chances few and far between. It wasn’t until the 73rd minute where Algerian winger Riyad Mahrez slotted home past a busy Thibaut Courtois to apply added pressure to the home team.

When it was looking like the comeback was not possible this time, that man Karim Benzema had his say. In the 90th and final minute, a deep cross from Camavinga was diverted by Benzema into the path of the onrushing Brazilian Rodrygo to give some hope for Ancelotti’s side.

A quickfire 91 SECONDS later the Brazilian got his second to level the tie and send it to extra-time. At the start of the additional period, a mistimed challenge by Ruben Dias gave Real a penalty. Karim face-to-face with shot-stopper Ederson coolly dispatched the penalty into the bottom corner to give his team the lead and the eventual win. 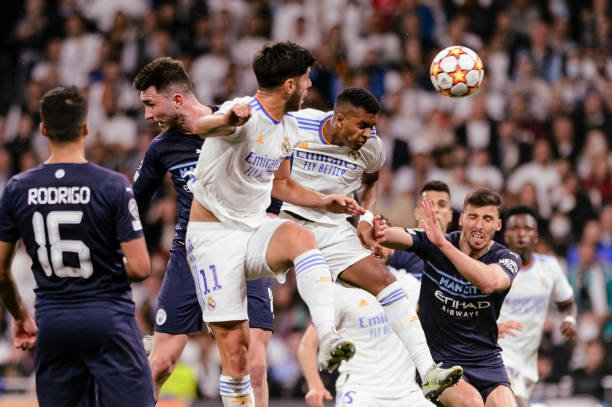 (Rodrygo scoring his second goal via header against Man City)
Now the final has been set with Real Madrid chasing title number 14, and Liverpool chasing number 7. With the talent both teams have, form comes into the selection of both teams for the final. The fireworks will be set off in France when both teams take the field, and viewership to quite possibly beat last year’s total of 700 million viewers.
PREDICTED TEAMS
REAL MADRID
Thibaut Courtois
Ferland Mendy
David Alaba
Eder Militao
Dani Carvajal
Luka Modric
Casemiro
Toni Kroos
Federico Valverde
Karim Benzema ©
Vinicius Jr. 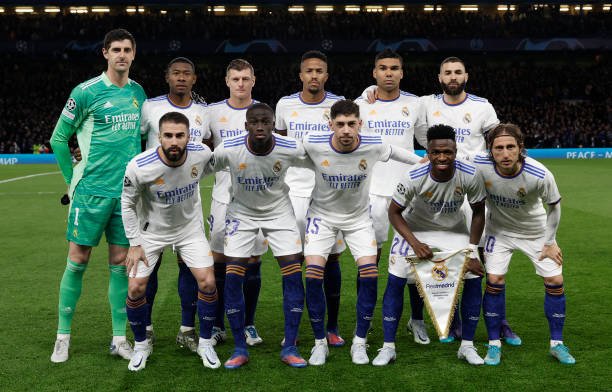 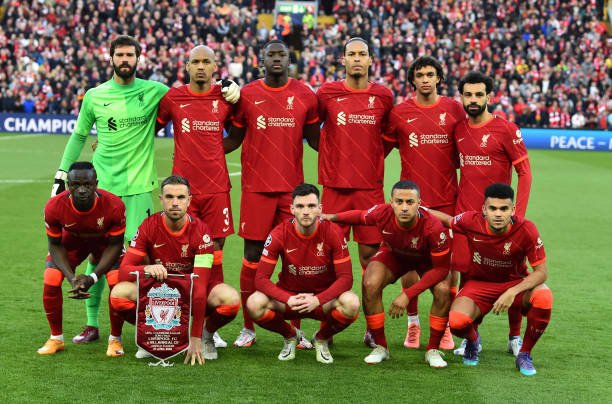