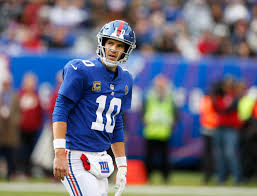 NEW YORK, N.Y.- Eli Manning is calling it a career. After an illustrious 16-year career that saw him hoist two Lombardi Trophies, the New Orleans native is finally hanging it up. The biggest question moving forward is whether Manning will have his own bust in Canton, Ohio, and become a member of the Pro Football Hall of Fame. While many can point to not only the two Super Bowls but the two Super Bowl MVPs he’s won, the overall statistics and eye test bear out that Manning just wasn’t consistent enough to earn the Hall of Fame honor.

An important parameter to set is that statistical comparisons to players already in the Hall of Fame aren’t relevant. The game is extremely different than it was 30, 20 and even 10 years ago. Offensive numbers, especially quarterback numbers, are more inflated than they’ve ever been. For fair and proper context, you have to view Eli and every offensive player only in the era that they played in.

Looking back on Eli’s career, he never achieved more than just a sliver of eliteness. His embarking legacy will be ruining the Patriots perfect season that was highlighted by David Tyree’s helmet catch in 2007. That is a lasting image that will never be forgotten. Following it up four years later and besting Bill Belichick and Tom Brady for a second time was equally as impressive. But eight games isn’t enough to boost an otherwise average career.

During his 14-years as the full-time starting quarterback, Eli was named to the Pro Bowl just four times and was rarely at the top of single-season passing leaderboards. Just once was Manning in the top 10 for completion percentage, finishing ninth in 2010 as he completed 62.9% of his passes. Manning was top 10 in passing yards per season six different times throughout his career, with his high watermark coming in 2011 when he was fourth.

In terms of touchdown passes per season, Manning finished in the top 10 eight times, but also never was higher than fourth. Eli led the league twice in interceptions thrown while also finishing in the top 5 four other times. Finally, in terms of yards per attempt, Eli had just two top 10 finishes.

Those stats exemplify that more than anything else, Eli was an average to above-average quarterback. Rarely did he reach the pinnacle of elite quarterback play and never was able to assert himself as one of the top quarterbacks during his time. This is further highlighted by his dead even 117-117 record as a starter and zero All-Pro honors.

In a league that gears their rules towards scoring, in essence making the quarterback position the most impactful and important in all of sports, the Giants were only able to make the playoffs six times, not winning a single playoff game outside of those two Super Bowl runs.  For reference, Eli has played in 12 playoff games throughout his career, less than his brother Peyton (27), Drew Brees (16), Tom Brady (41), Ben Roethlisberger (21) and Aaron Rodgers (18) while playing in just one more playoff game than Philip Rivers. Compared to the true greats at the quarterback position, Eli falls short yet again.

What makes any hall of fame so special is that it celebrates the best of the best. The elite. The greatest to ever do it. After all, it’s not the hall of really good or pretty good. It exists for only those who belong in the company of immortality. Eli had two of the biggest moments in Super Bowl history. He slew Goliath. That is something that will never be taken away from him. The problem is that the Hall of Fame isn’t about a few great moments. It’s about a career filled with consistent, elite play. Outside of sharing the first three letters, Eli and elite haven’t had much in common.