Eight is Great Too 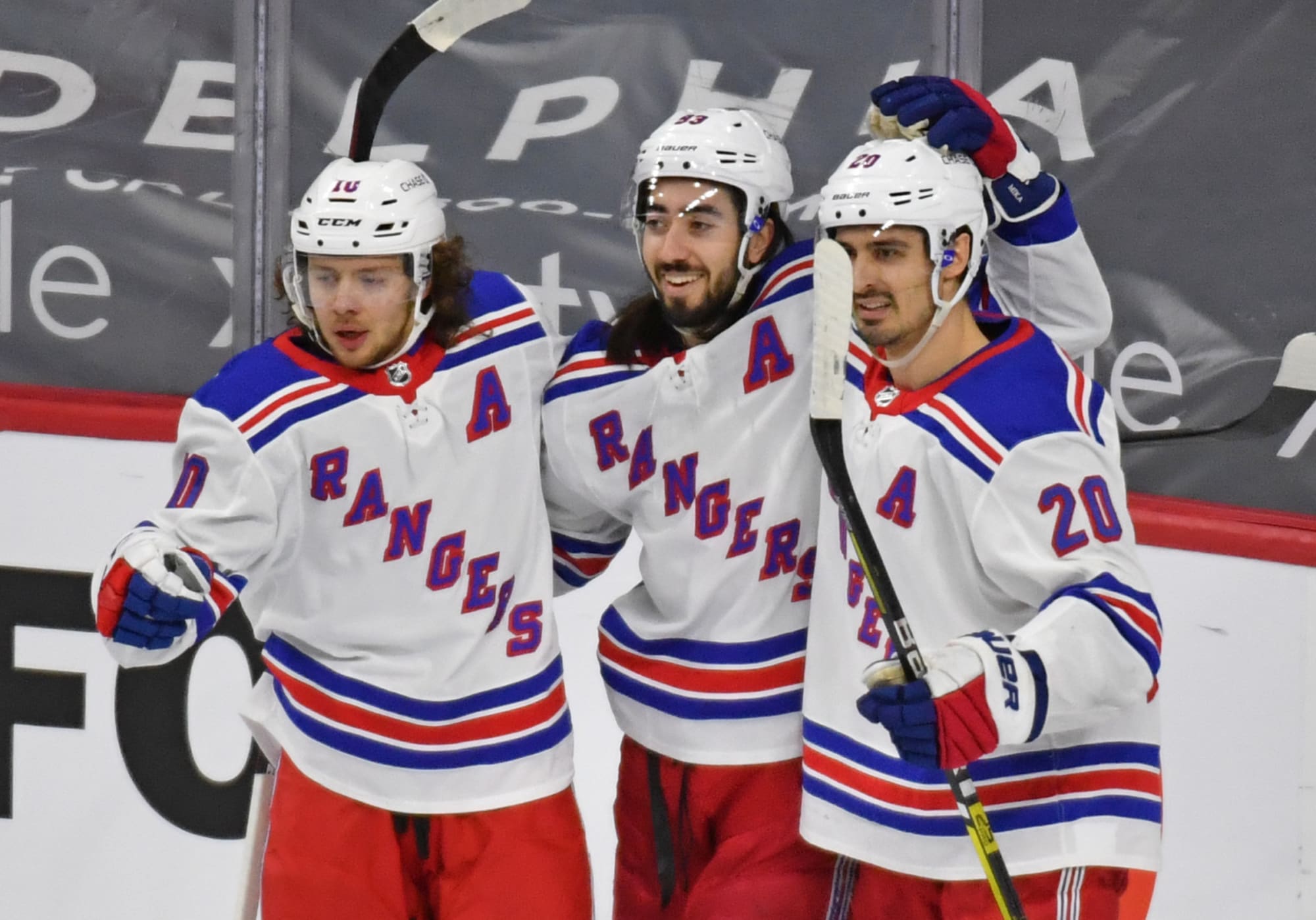 Rangers fans thought they were dreaming when they watched their beloved Blueshirts score nine on the rival Philadelphia Flyers. It in fact was not a dream and instead a prelude. Eight days after their first rampage against the Flyers, the Rangers followed with an eight-goal sequel.

After their nine-goal Broadway show at the Garden, the Rangers took their act down to the City of Brotherly Love. And they certainly did not show any of that love to the Flyers. Instead of potting seven goals in 18 minutes, the Rangers blitzed the Flyers twice. Once in the first, and once in the second period.

Carter Hart was able to hold the Rangers’ offense in check until Artemi Panarin threaded the needle to Ryan Strome to give New York a 1-0 lead. Panarin’s pass was so pinpoint, that I probably could have scored Strome’s goal.

The blitz continued 52 seconds later as Pavel Buchnevich found the net against Philadelphia again. The 2013 third-round pick has turned out to be quite a steal for the Rangers, with Buchnevich racking up 31 points in 33 games this season. Coach David Quinn has rewarded the right winger for his strong play, as Buchnevich’s average time on ice has increased from 16:56 last season to 19 minutes this season. I have said it before and will say it again. Buchnevich is a restricted free agent at season’s end and it would be wise of the Rangers to bring Buchnevich back to the Big Apple for years to come.

Anyways, it seemed the Rangers were in for another night of scoring endlessly on the Flyers. After Justin Braun tripped Kaapo Kakko, the Rangers were given a second straight power play. After coming up empty on the first, Mika Zibanejad made sure the Rangers would not fail on the back-to-back power play opportunity.

In the span of 5:35, the Rangers had put up three on the Flyers. And it would not be the last time New York pulled that act on the night.

As the game moved into the middle frame, it felt a lot like St. Patrick’s Day again for the Rangers. The Blueshirts, led by Zibanejad, began a barrage on the Flyers. Again.

Zibanejad racked up back-to-back power play goals to complete back-to-back hat tricks versus the Flyers. To boot, Adam Fox picked up his third and fourth assists of the night only 2:06 into period number two. The madness did not stop there as K’Andre Miller got in on the fun with a seeing eye shot from the point that found its way through. Three goals in 1:48 extended the Rangers led to 6-0. This has the feelings of a football drive. Three plays for 53 yards in 1:48 resulting in a field goal to go up 6-0. I am no rocket scientist, but I cannot imagine the 2,854 fans in Wells Fargo Center were too pleased. Well maybe not 2,854. Let’s assume some Rangers fans braved their way down the New Jersey Turnpike on a Thursday night. Boy, did they get their money’s worth.

The one rough spot of the Rangers’ night came throughout the final 17 minutes of the second period. The Flyers despite a six-goal deficit picked up their play with goals from Claude Giroux and former Ranger Kevin Hayes. Things could have gotten a lot more interesting had Igor Shesterkin not made 24 saves on 26 shots through two periods. 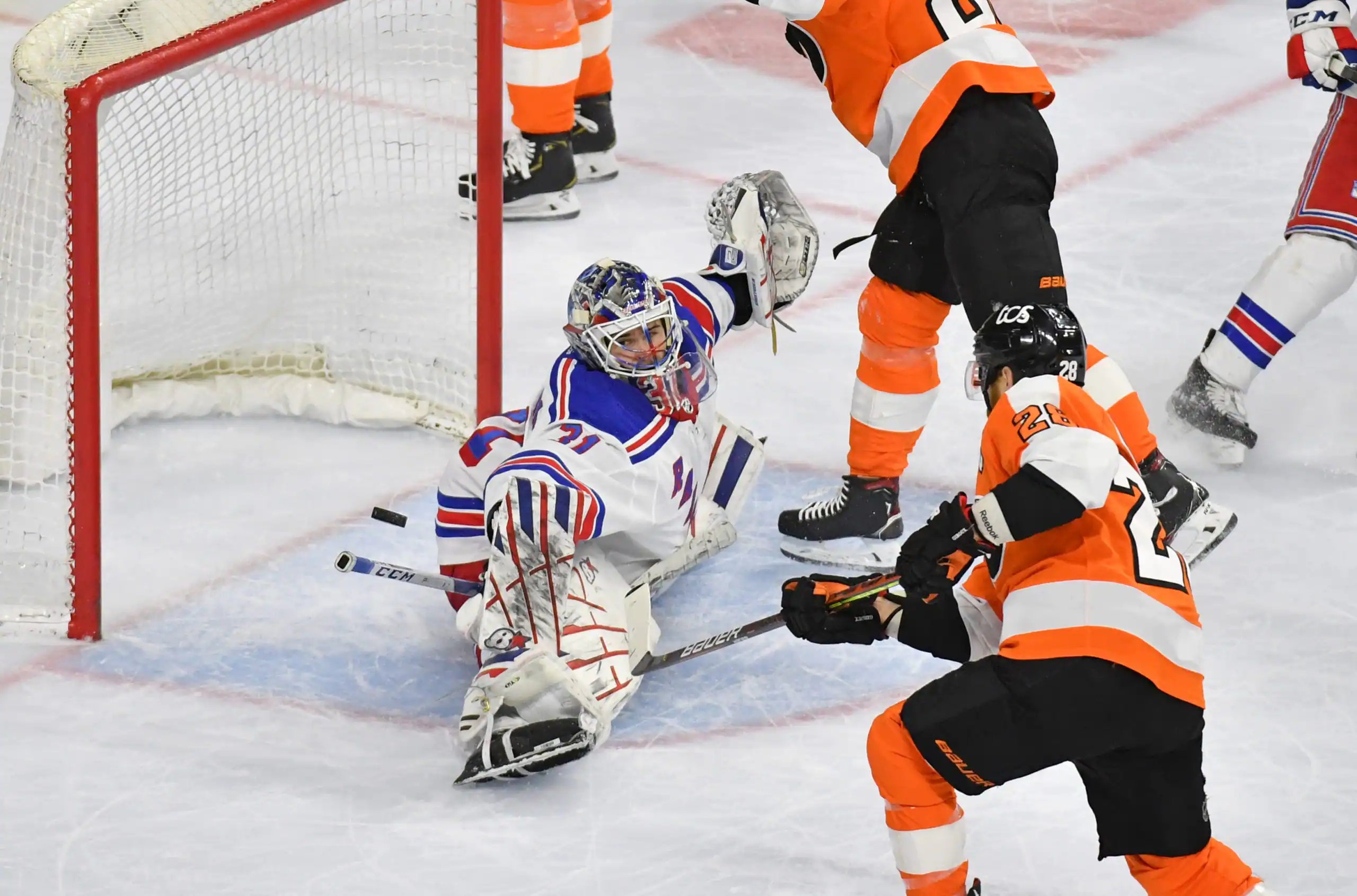 Taking a 6-2 lead into the third period, the Rangers kept their foot on the gas. Zibanejad again assisted Buchnevich on another goal, this one of the short-handed variety to go up 7-2. The goal completed another six-point, three-goal, and three-assist game for Zibanejad against the Flyers.

It is no secret that Zibanejad struggled for the first half of the season with only 11 points in 27 games. In the two-game 17-goal rampage versus the Flyers, Zibanejad compiled 12 points on six goals and six assists.

Filip Chytil put a bow on this one for the Rangers with 1:58 remaining to give the Rangers the great number of eight. The 8-3 victory propelled the Rangers 15-13-4 on the season, but let’s not forget about Shesterkin’s efforts in his first game back from injury. The Flyers outshot the Rangers 44-22 on the night, giving Shesterkin 41 saves on the night.

As fate would have it, the Rangers have dropped two in a row since their eight-goal parade. The Flyers responded on Saturday with a 2-1 win as the Rangers ran out of pixie dust vs. Philadelphia. Sunday saw Coach Quinn’s return to the bench in a 5-4 loss to Washington.

As painful as Saturday’s and Sunday’s losses were for the fringe playoff team, the Rangers will always have the memories of 17 goals in two games against the Broad Street Bullies. Yes Rangers fans, feel free to crack a smile.