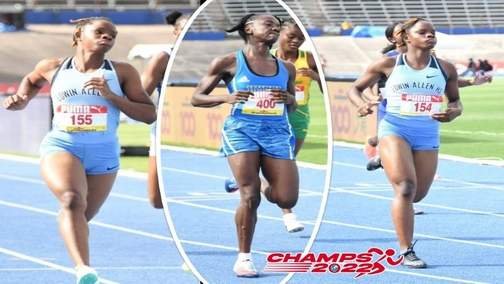 (Photo Credit: Jamaica Observer) {From left: Tia Clayton, Brianna Lyston, Tina Clayton}
As the ISSA (Inter-Secondary School Athletics) Boys and Girls Athletics Champions move into day three, that 100 meter final in the class 1 girls was one race that had people chattering. The high school athletics championships that take place in the National Stadium in Kingston, Jamaica, is a five-day event that started on the 5thof April and commences on the 9th.

Heading into the championship there were talks of who were the favorites to win it all on both sides, and also some individual winners. The usual culprits such as Kingston College, defending champions Jamaica College, and Calabar on the boys’ side, with Edwin Allen, Holmwood Technical, and Hydel High on the girls’ side, it is shaping up to be an intriguing championship.

The race that had a tear in the athletics fanbase of the country was who was going to win the class 1 (age 17-19) 100-meter dash. The race was going to be contested by the World U-20 Champion Tina Clayton, her twin sister Tia, and the rejuvenated and fastest Jamaican girl in the world at the moment Brianna Lyston.

Lyston who got injured early in class 3 while still a St. Jago High School athlete, now of Hydel High, came back to the competition going a blistering 11.14 seconds at the Central Championships meet earlier in the year, and a majority of the athletics fraternity leaned towards Lyston for the win. 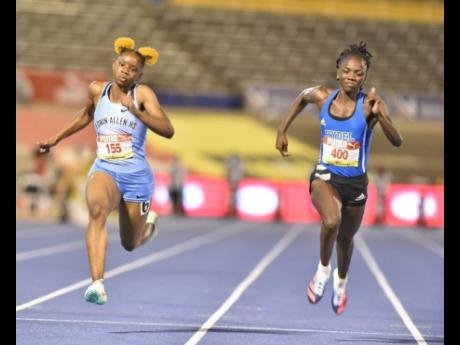 However, the Clayton twins were never to be denied, well Tina anyway. When they came out for the finals on Wednesday night, it was hard to read the emotions of the three athletes. Faces like World Series Poker players made it hard to see if anyone was more confident, or even nervous.

The stage was set. Tia Clayton in lane 4, Brianna Lyston in 5, and Tina Clayton in 6. A hush around the stadium then…….BANG! Off they go with Tina and Lyston getting off to glorious starts, Lyston is trying to get back at Tina with Tia a bit of a distance behind, but Tina finds the afterburners and JUST holds off Lyston at the end. The reigning world champion of her age group copped gold in 11.23 seconds, ahead of Lyston in 11.26 seconds, and Tia Clayton 3rd in 11.47.

“Champs” continues on Thursday at 9:20 am JA time on the track with the 200 meters preliminary rounds on both the boys’ and girls’ sides. Coverage can be found on onespotmedia.com for those outside the country.