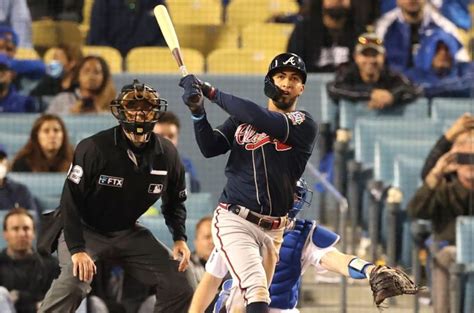 Will Atlanta and Houston enact sweet postseason revenge and meet in the World Series?

As the calendar turns toward winter, the remaining days of autumn are highlighted by the culmination of the MLB postseason.

In the American League, the Red Sox power seems to have dissipated. In losing Games 4 and 5, the Sox offense has hit a wall after connecting for 18 HR, hitting .338, and averaging just under nine runs PG in their previous six games. The vaunted Red Sox offense combined for three runs while hitting .157 overall and going 0-13 with RISP.

Meanwhile, Dusty Baker’s unit finds themselves one win away from reaching the World Series for the third time in five seasons. If his team eliminates Boston, Baker receives another chance to win his first championship as a manager (currently owns the record for most games managed without winning a World Series).

Finally, in recognition of Max Scherzer’s start tonight, here are a few examples of pitchers providing super-human efforts facing elimination along with salvaging their team’s bullpen.

Facing elimination, Beckett threw a 2-hit shutout, striking out 11 Cubs while inspiring Florida to rally and win the series.

Without the former ESPN announcer efforts, one of the most memorable postseason moments in MLB would cease to exist.

Jackson sent the ALCS back to Toronto with a brilliant, 8-hit shutout of the Blue Jays. Jackson’s performance came at the perfect moment, provided how poorly the Royals bullpen performed in Games 1-4. The left-hander delivered a repeat of his ALCS performance in Game 5 of the World Series. Jackson’s complete Game, five-hitter at St. Louis, sent the series back to Kansas City, where the Royals completed another series comeback.

Needing to save an extended bullpen, Lolich allowed nine hits and three runs but went the distance in the Tigers 5-3 victory.