Do the Jets have Deep Pockets for the Deep Threat, Robby Anderson? 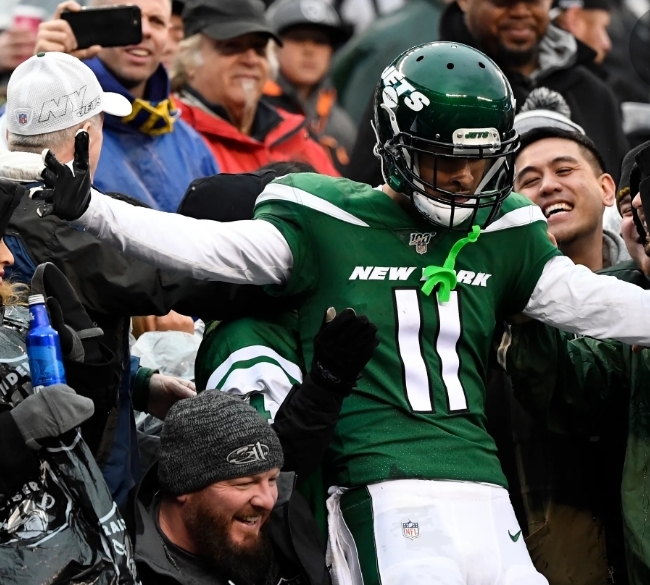 We all knew Robby Anderson’s contract with the Jets was ending at the end of this season but we didn’t know how depleted the entire team would be. The 26 year old wide receiver has surely grown into himself. Anderson has had a decent year with 5 touchdowns on 49 receptions at Week 17. But if the rumors are true, that he’s looking for a 4 year, 10 million dollar contract the Jets might not be able to resign him.

Robby Anderson was once labeled a “One Trick Pony” since most of his plays were speedy deep routes. This year he was utilized in more plays and short passes. He has had his ups and downs with this team but the fact remains that Sam Darnold loves him. Unfortunately, the might not be able to afford to the Sam and Robby duo.

Robby’s career high is 63 catches for 941 yards – two years ago. That’s definitely not a $10 million dollar caliber receiver. Many have tried to compare him to his wide receiver counterparts such as Tyler Lockett, Emmanuel Sanders and Larry Fitzgerald. All are getting paid between 10-12 millions dollars a year. Yet they all have more receptions and/or yards than Anderson. A valid argument could be made for an 8 million dollar a year contract with performance incentives. Outside of that, 10 million for a number 2 wide receiver with mediocre numbers seems outlandish.

Joe Douglas will have his hands full this off season as he tries to rebuild the Jets from the ground up. The team is depleted and needs a new offensive line, pass rush, and corner backs which will be quite costly! What a difference a year can make in the NFL. The Jets went from having the 2nd highest cap in the league to having to try and get position players on a budget. After addressing these issues he will have little left to figure out how to address his wide receiver and running back situation. If Anderson is unwilling to negotiate, his return is highly unlikely.