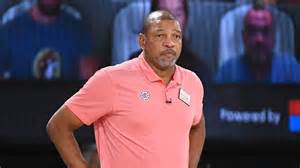 Despite NBA experts extending an invitation to the Western Conference Finals after their marquis offseason signings of Kawhi Leonard and Paul George, the Los Angeles Clippers Clippers predictably failed in their 50th attempt. The much anticipated “Battle for LA” against their Staples Center’s co-inhabitants, will be put on hold for at least another year.

While blowing a 3-1 series lead to Denver adds to their latest franchise failure, Doc Rivers made history himself. Rivers stands alone as the only coach in pro sports history to lose three series when holding a 3-1 advantage.

The Nuggets joined the 1985 Kansas City Royals and 2003 Minnesota Wild as the only teams to erase multiple 3-1 series deficits in a single playoff year. The Nuggets will try to equal the Royals in winning a title, while the Wild lost in the Conference Finals to Anaheim.