CAN A TWO-LOSS TEAM MAKE THE COLLEGE FOOTBALL PLAYOFF? 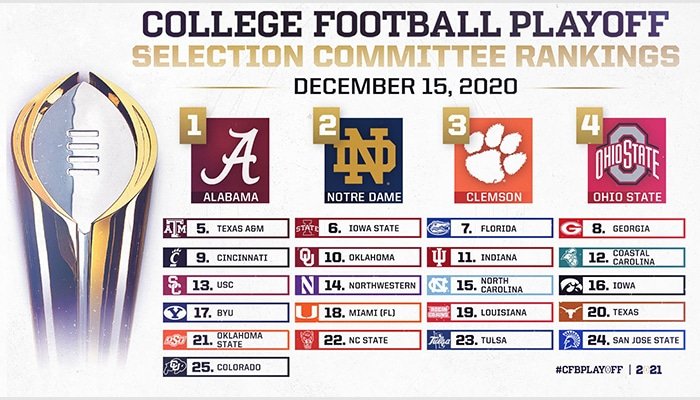 NEW YORK, N.Y.- A white cleat flew through the Saturday evening fog in Gainesville, Florida. A seemingly harmless act on the surface could have ripple effects that travel 450 miles north and affect the entire college football landscape moving forward. Is it possible that the monumental upset that LSU pulled off over then No. 6 Florida last Saturday night in the Swamp, aided by the most memorable shoe toss college football fans will ever see, could set a precedent to allow a two-loss team to make the College Football Playoff for the first time in its existence?

Before we go any further, some clarification is necessary. This isn’t a Florida puff piece, opining for the Gators to still make the Playoff. This is actually an argument as to why the Clemson Tigers, ranked third in the poll, should still make the final four even if they lose to Notre Dame for a second time this weekend. This would have never been a thought I considered at any point in the last 16 weeks of this season or in the seven years that the Playoff has been in existence, but things changed a few days ago. There are two reasons why I believe that if the Tigers lose close to Notre Dame, they still would make the Playoff over No. 5 Texas A&M.

The first reason has to do with the College Football Playoff committee. They set the precedent just days ago that losses aren’t the end of the world. Really, in their mind, losses are almost irrelevant. Look at what happened last week as Florida, ranked sixth, lost at home to a talent depleted, opt out filled LSU team. This was their second loss of the season and should have ended any hopes of making the Playoff. But instead, the committee agreed to only slide the Gators down one whole spot, from sixth to seventh as we enter championship weekend. If Florida essentially goes unpunished for losing a game that it had no business losing, how can the committee justify dropping the third ranked Tigers more than one spot after losing to an elite Notre Dame team? It’s why despite having two losses, Clemson would still remain in the top four.

If the committee’s precedent isn’t enough to convince you, how about a straight up resume comparison between the two teams in question. When it comes to strength of schedule, ESPN’s FPI ranking has the Tigers with the third hardest schedule in the country while the Aggies hold the 10th most difficult slate. A&M can boast a better win, as they defeated No. 7 Florida while Clemson’s best win is over a Miami team that just got their doors blown off by North Carolina.

While the Aggies hold a more impressive win, who has a worse loss? Both of the Tigers’ losses would be to the Irish, both times coming when Notre Dame was ranked in the top four. A note has to be made that the first loss came in double overtime while Trevor Lawrence and a few other key defensive leaders were out. The SEC West contender would have one less loss than Clemson, but their loss was about as competitive as a race between a cheetah and an elephant. The Aggies were beatdown by Alabama, losing by four touchdowns in their showdown. So, while Clemson would have twice as many losses as A&M, I would give the Tigers the edge because they were actually competitive in those games.

The last two metrics are courtesy of The Athletic and are two measures used by the committee to determine a team’s dominance week in and week out. Clemson is sixth in the country in yards per play differential (how many yards are you outgaining your opponent by on a per play basis) while Texas A&M is 29th. When it comes to points per game differential, the Tigers are fourth while the Aggies are 32nd. The numbers don’t lie. Clemson has been significantly more dominant on a weekly basis than Texas A&M.

Whether it’s the committee’s indifference towards losing or the straight up statistics that outline Clemson’s dominance compared to Texas A&M’s this season, Saturday’s ACC Championship Game can almost be considered meaningless. Both teams should feel confident that win or lose, they still will have a chance to compete for the ultimate prize. A cleat toss setting the stage for a two-loss team to make history is very fitting. It is 2020 after all. And this is college football.