It did not happen overnight for Charlie Slowes. The kid born in the Bronx didn’t just wave a magic wand to become the radio voice of the Washington Nationals. No, Slowes worked very hard from a very young age to get where he is today.
Slowes’ first broadcasting experience came as a teenager when he would go to Mets, Knicks, Islanders, etc. games and sit in an empty section to record himself calling the game. As a senior at Roosevelt High School in Yonkers, New York, Slowes gained experience working his school’s football games in the first televised events form that city.
For college, Slowes attended Fordham University where he was a central part of Fordham’s school owned, student run, 50,000-watt FM radio station, WFUV, 90.7 FM. With WFUV, Slowes was a regular on daily sportscasts, weekly sports talk shows, and he was able to do play-by-play for baseball, basketball, football, hockey, and soccer. A jack of all trades, he also wrote professionally for the Gannett Westchester Newspapers, covering high school and college sports.
Even when Slowes was not on the call for Fordham radio, he would still find time to practice his play-by-play skills. As long as he had a credential for a college or big-league sporting event, Slowes would find an empty booth in the press box and record himself.
While Slowes’ road to a major league booth was looking good, when was he going to get his big break? That break came one Sunday afternoon in Manhattan at the Loew’s Summit Hotel. With the St. Louis Blues slated to take on the Rangers at Madison Square Garden that night, a mutual friend introduced Slowes to legendary coach and General Manager Emile Francis.
With a golden opportunity in front of him, Slowes gave Francis his broadcasting tapes. Continuing the domino effect, Francis passed the tapes on to Blues’ play-by-play broadcaster Dan Kelly. Like a game of hot potato, Kelly passed Slowes’ tapes on to KMOX Radio in St. Louis.
KMOX liked what they heard, as they gave Slowes a free-lancing job where he covered games in New York. Slowes’ hard work paid off in 1984 when a spot at KMOX opened and he was given the position. While working in St. Louis, Slowes did sportscasts and talk shows. In his spare time, he attended multiple Blues and Cardinals games and continued his tradition of recording himself call games in empty booths. 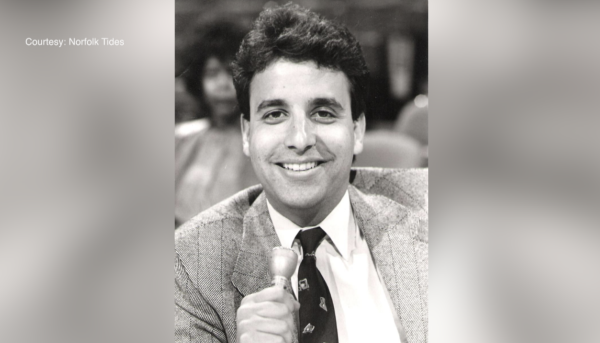 Slowes got his first crack at professional broadcasting when he was a fill-in color commentator for the Blues. Being in St. Louis was Slowes’ second break. With the Oakland Athletics scheduled to play the Royals in Kansas City, Slowes was called into emergency duty on the CBS Radio Game of the Week.
Yankees’ broadcaster Bill White was supposed to be John Rooney’s color man that night, but White stayed in Toronto after the Yankees beat the Blue Jays to pull within two games of first place with two games remaining. Thus, it became Slowes’ time to shine as he and Rooney rotated play-by-play that night at Royals Stadium.
While in St. Louis in the spring of 1986, Slowes was offered the play-by-play job for the Tidewater Tides, the New York Mets Triple A affiliate. It did not take Slowes long to get an offer from a big-league team. Six weeks into the Tides job, Slowes was offered the opportunity to do play-by-play for the NBA’s Washington Bullets, a stint that would cover 11 seasons. During that time, Slowes earned the opportunity to do an NBC Game of the Week in 1988, and he also did freelance work for ESPN and Westwood One.
Slowes returned to his first love, baseball, in 1998 when he was named an original radio voice of the expansion Tampa Bay Devil Rays. Slowes teamed up with Paul Olden for the Devil Rays’ first seven seasons.
Slowes returned to our nation’s capital as did baseball in 2005 when the Montreal Expos moved to Washington and were re-named the Nationals. Along with his partner Dave Jageler, Slowes is a staple on 106.7 The Fan for Nationals games with his “Bang, zoom goes (player’s name)!” home run call and “A Curly W is in the books!” after Nationals victories. 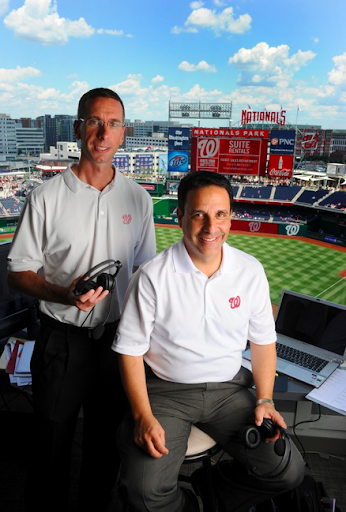 Even as the radio voice of the Nationals, Slowes’ journey in the broadcasting field has seemed to always lead him to be in the right place at the right time. In 2018 Spring Training, Capitals’ radio play-by-play man John Walton was away in South Korea calling women’s hockey at the Winter Olympics.
The ultimate coincidence, the Capitals happened to be playing the Panthers in Sunrise, only an hour away from the Nationals’ spring training home in West Palm Beach. So, it was Slowes who spent a night at BB&T Center calling an NHL game, the sport that helped jumpstart his career. Washington ended up taking an ugly 3-2 loss that night, but they went on to win their first Stanley Cup that spring. Slowes jokingly said he is still waiting for his Stanley Cup ring due to his one-night appearance on Capitals radio.
Slowes did not have to wait much longer for a championship ring though. He was on the call for the Nationals’ magical ride to their first World Series title this past season. Heading into Game 7 at Minute Maid Park, Slowes kept a positive attitude. “I had a call if they won, but not if they lost. I wasn’t thinking about that.”
With Washington leading 6-2 in the bottom of the ninth, Slowes knew it was time to get his call ready. “When Altuve struck out on three pitches you kind of knew it was coming. The Astros looked dead; the ballpark was dead. I felt it coming, I just wanted to make sure it was something people could understand and something that would mark the moment.”
Slowes surely did not swing and miss with his championship call.
As a World Series champion broadcaster, Charlie Slowes knows getting into the broadcasting field takes a lot of hard work and a little bit of luck. But at the end of the day, it was Charlie Slowes’ fight to finish, and he certainly did.