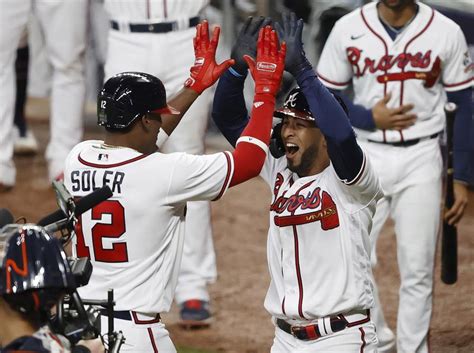 Braves One Win Away From Ending Postseason Futility

Across the nation, groups of individuals look to celebrate our nation’s return to “normalcy” (or whatever normalcy looks like). While football fans enjoy week eight of the NFL season, melancholy baseball fans prepare for Game 5 of the World Series.

The last time Atlanta hosted Game 5 of a World Series (October 24, 1996), John Smoltz and Andy Pettitte treated everyone to one of the greatest games in baseball history. The Hall of Fame pitcher refers to his performance (8 IP, 4 H, one unearned run, 3 BB, 10 K – 135 pitches) as “the greatest game I ever pitched because I had nothing that day.” The winning run reached base when Gold Glove OF (Marquis Grissom & Jermaine Dye) miscommunicated on a routine fly ball by Charlie Hayes.

During the 1990s, the city of Atlanta grew comfortable hosting major league baseball’s premier event. The 1996 World Series represented the fourth time in five seasons Atlanta hosted three World Series games. Unfortunately for the Braves, only once did they have the opportunity to finish off an opponent and win the most coveted title in baseball.

Tom Glavine took the mound for the Braves on October 28, 1995, at Fulton-County Stadium against the foremost offensive juggernaut of that era, the Cleveland Indians. Cleveland’s lineup featured three Hall of Famers, 22 combined All-Star appearances (not including the three HOF), and 19 Gold Glove Awards (not including HOF). Glavine’s eight shutout innings gave way to Mark Wohlers, and their 1-0 victory remains the cities only World Series title.

The Braves’ most tenured starter, Charlie Morton, saw his season end in Game 1 with a broken fibula. Tucker Davidson, an elite pitching prospect who replaced Morton on the roster, gets the chance to make history in Game 5.

Clinching the series in Atlanta would be especially sweet for the city, as MLB moved the 2021 All-Star Game to Colorado after bowing to political pressure.

Houston returns to Game 1 starter Framber Valdez. Atlanta roughed up the left-hander from the Dominican, collecting eight hits and five runs in his two innings of work.