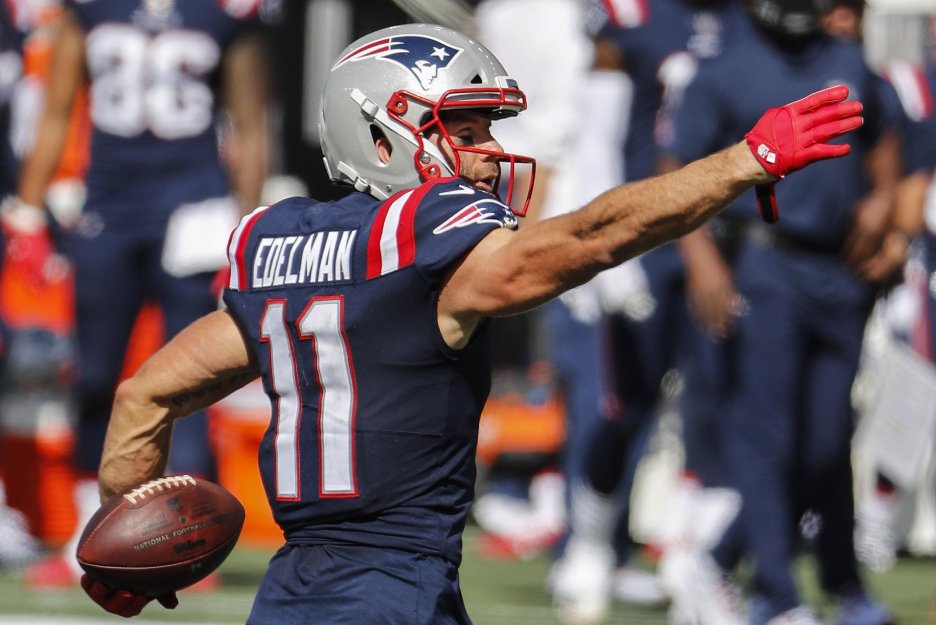 Julian, Get In Your Spot!

“JULIAN, GET IN YOUR SPOT!” yelled seven-time super bowl champ Tom Brady to recently retired and patriots legend Julian Edelman. The New England wide receiver announced his official retirement, and today, we’re going to explore a little bit of his life and his exciting NFL career.

Coming out of Redwood City, California, the 5’10 receiver from Kent State University was drafted in the 7th round as the 232nd overall by the New England Patriots during the 2009 NFL Draft. Although in college he played quarterback, Patriots offensive coordinator Erhardt-Perkins and receiver coach Chad O’Shea had other plans for him.

Not only does Edelman play wide receiver, but he’s also played special teams serving as a punt and kick returner, having a total of 1,986 career yards with four touchdowns. You’re probably reading this thinking, “wow, he’s a multi-dimensional player” little did you know that he’s also played a little bit of defense as well. From his last three seasons, he has also relived his quarterback days, recording a total of 128 passing yards and one touchdown.

In his 11 seasons with the Patriots, Edelman has a career total of 6,822 receiving yards, 620 receptions, and 36 touchdowns. Statistically, it’s not bad at all, but stats sometimes don’t tell the whole story. Besides being Tom Brady’s favorite receiver, Edelman is mainly known for making all the big catches for the Patriots. With that in mind, he is also a Super Bowl MVP winning it against the 13-3 win against the rams in 2018. 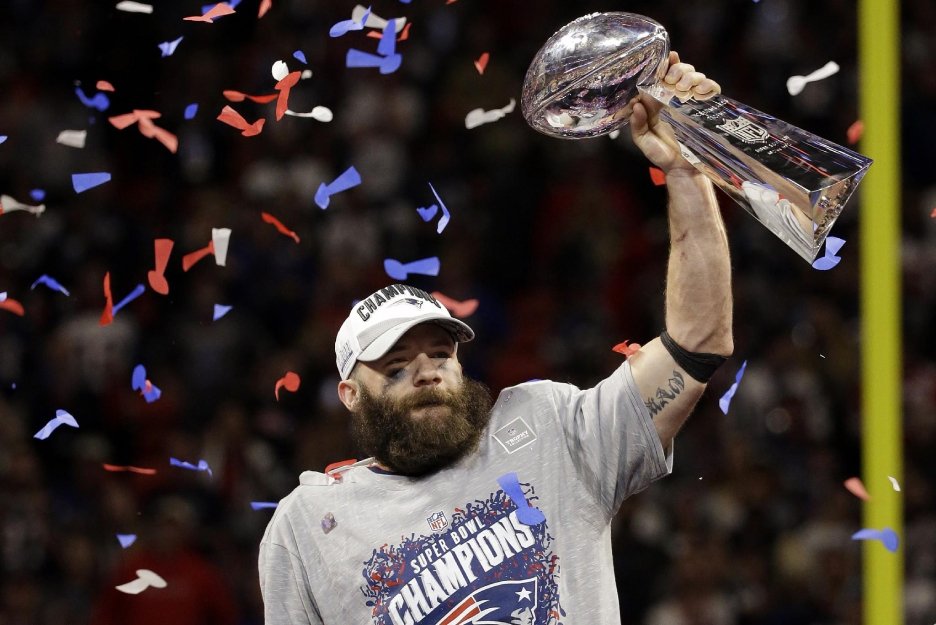 Although he’s not a big-name wideout like Randy Mossand Jerry Rice, he’s still a patriots legend, three-time Super Bowl champion, and a Super Bowl MVP. Not to mention he has one of the craziest catches in Super Bowl history.

Congrats on retirement; we’ll probably see you on the Buccaneers in the near year or two! 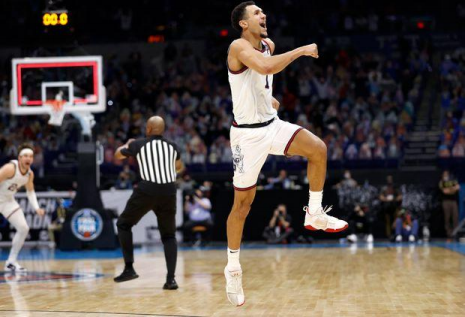 The Madness In March Madness

Woah, the craziness we’ve seen during March Madness. Oral Roberts knocking out Ohio State in their first game, destroying everyone’s bracket to UCLA coming so close to making their Cinderella story come true against Gonzaga but lost to a buzzer-beater.

No one has expected this year’s March Madness to be like this, but since 2020 I don’t think anyone should be surprised about anything truly this shocking. 2021 is becoming almost precisely like 2021 with the new variant and the news with rapper DMX.

This year’s March Madness is for surly going down in history from no one being in the stadium to everyone’s bracket getting decimated with all of these upsets.

I can also guarantee you that everyone was not expecting rank 11 UCLA to make it this far and coming so close to beating the number 1 ranked Gonzaga University. It would’ve been nice to see this Cinderella team go all the way and possibly beat Baylor but, Gonzaga is number 1 for a reason and have one of the top recruits and possibly a top ten draft pick in this year’s draft Jalen Suggs. 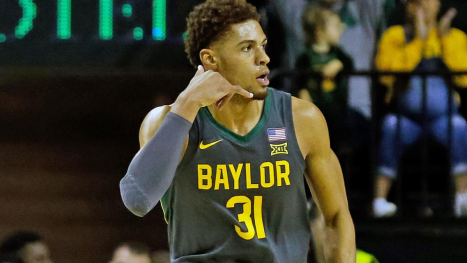 Under the current circumstances, I give every team their respected props having to deal with Covid, and wish all the players the best of luck as some of them enter the new NBA Draft. 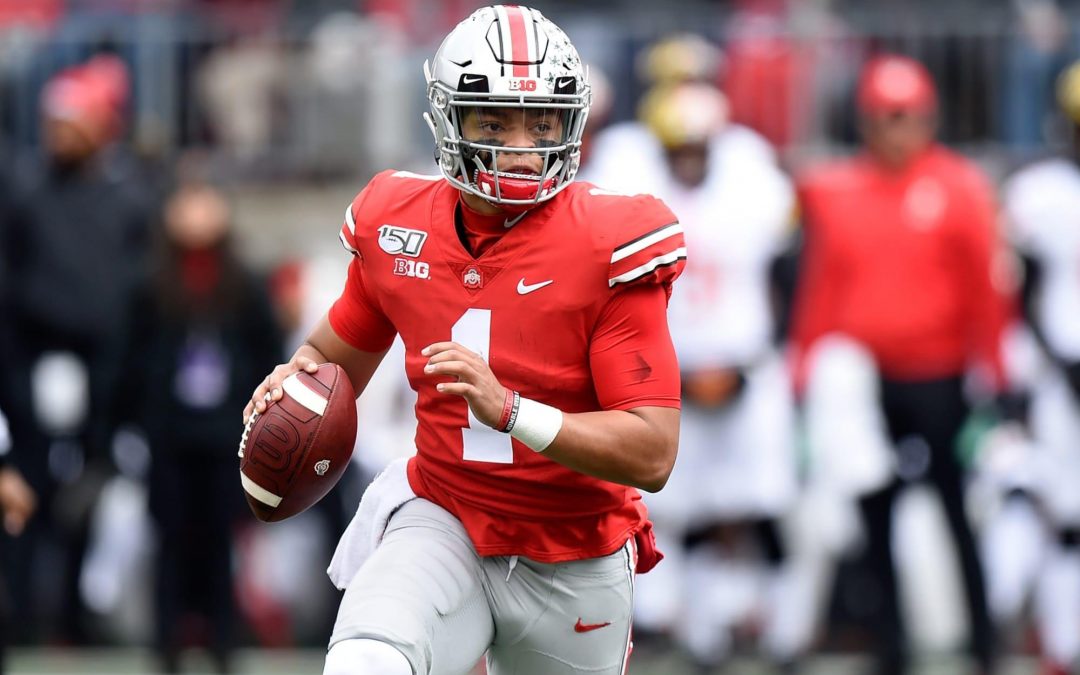 Are The 49ers Back In Super Bowl Contention

After trading up nine picks, the San Francisco 49ersnow have the number three pick in the 2021-2022 NFL draft.

With a broad choice of players in the draft, fans and analysts speculate that the 49ers general manager John Lynch will use the third pick to draft either Ohio State’s star quarterback Justin Fields or BYU’s quarterback Zach Wilson. 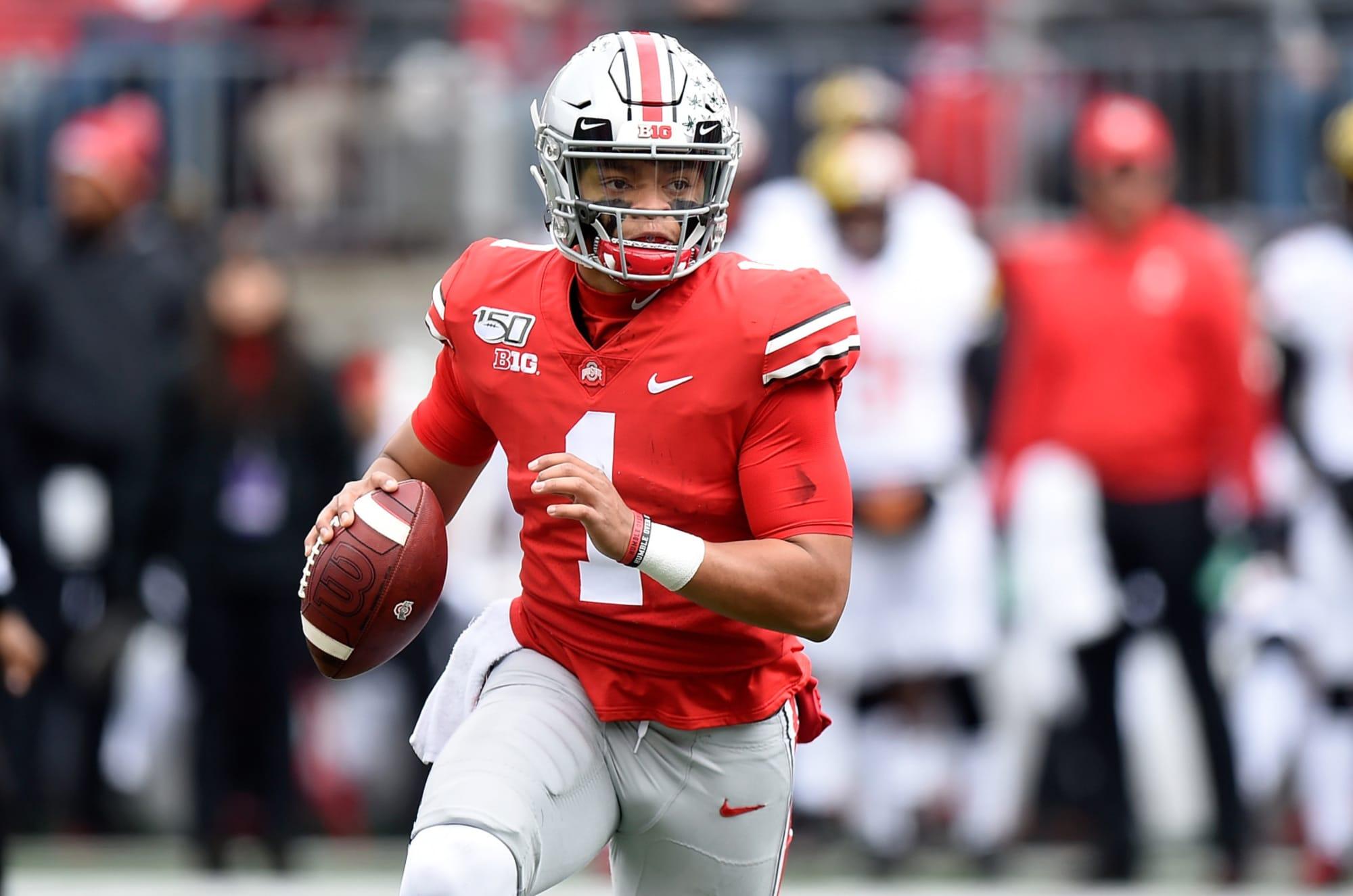 Both Quarterbacks under Kyle Shanahan will shine in this offense. They have weapons from George Kittle to Deebo Samuel and Brandon Aiyuk.

The 49ers haven’t had a mobile quarterback since Colin Kaepernick, so we can only imagine how explosive this offense will get drafting either quarterback.

Let me remind you that also under Jimmy G; the Niners strive well. Still, after dealing with a season-ending injury and a high ankle sprain to keep him out of the game, Garapolo hasn’t been the same, and it’s time to move on, and I think with this first-round pick a great way to begin their moving on process is to draft either Fields or Wilson.

With their recent signings as well, the 49ers’ defense is looking strong. The only thing I see is their slight downfall to this defense is new defensive coordinator DeMarco Ryans. 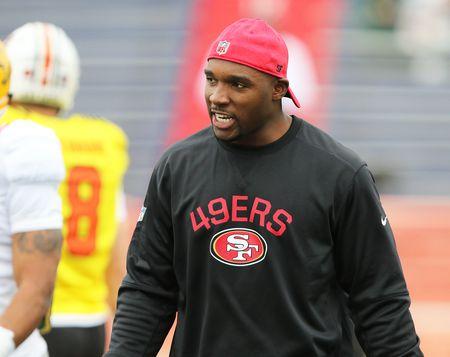 Taking charge of this defense in this powerhouse division, will he raise the bar higher than Robert Salah, or will he run this defense to the ground.

Guess we’ll have to see this coming up season. 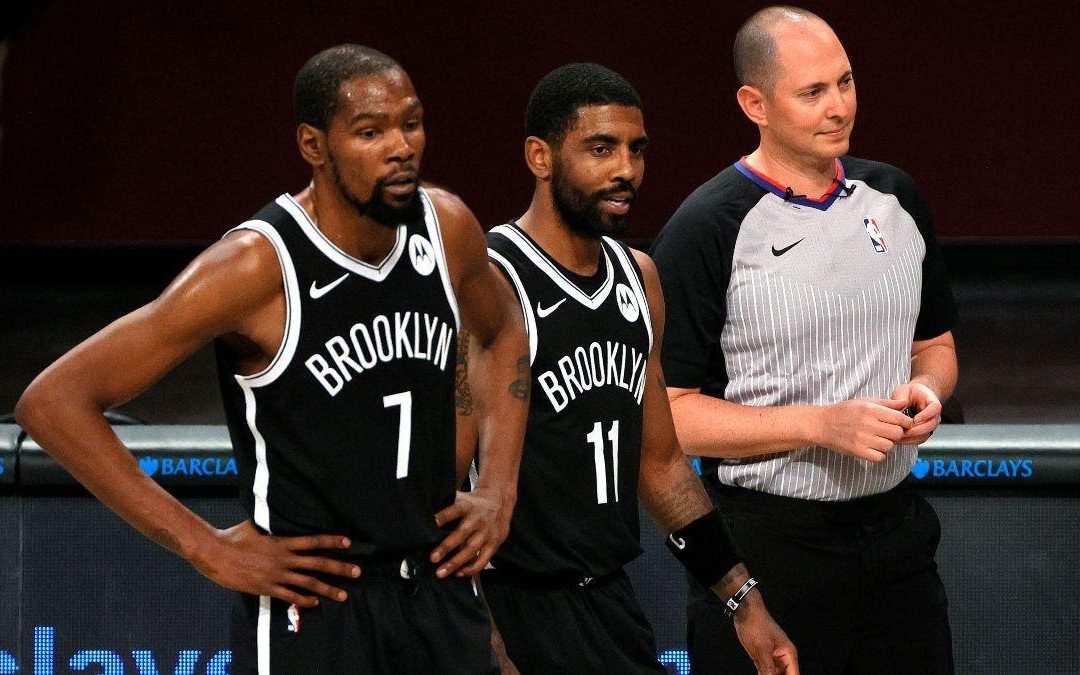 Although all five haven’t played entirely together yet, they may make it to their third finals appearance with this roster.

The Nets currently sit at second in the eastern conference with a record of 27-13, right below the 28-12 Philidelphia 76ers.

Even with Kevin Durant’s hamstring injury, a healthy Kyrie Irving and James Harden are still putting in work, winning their last three games since the all-star break. 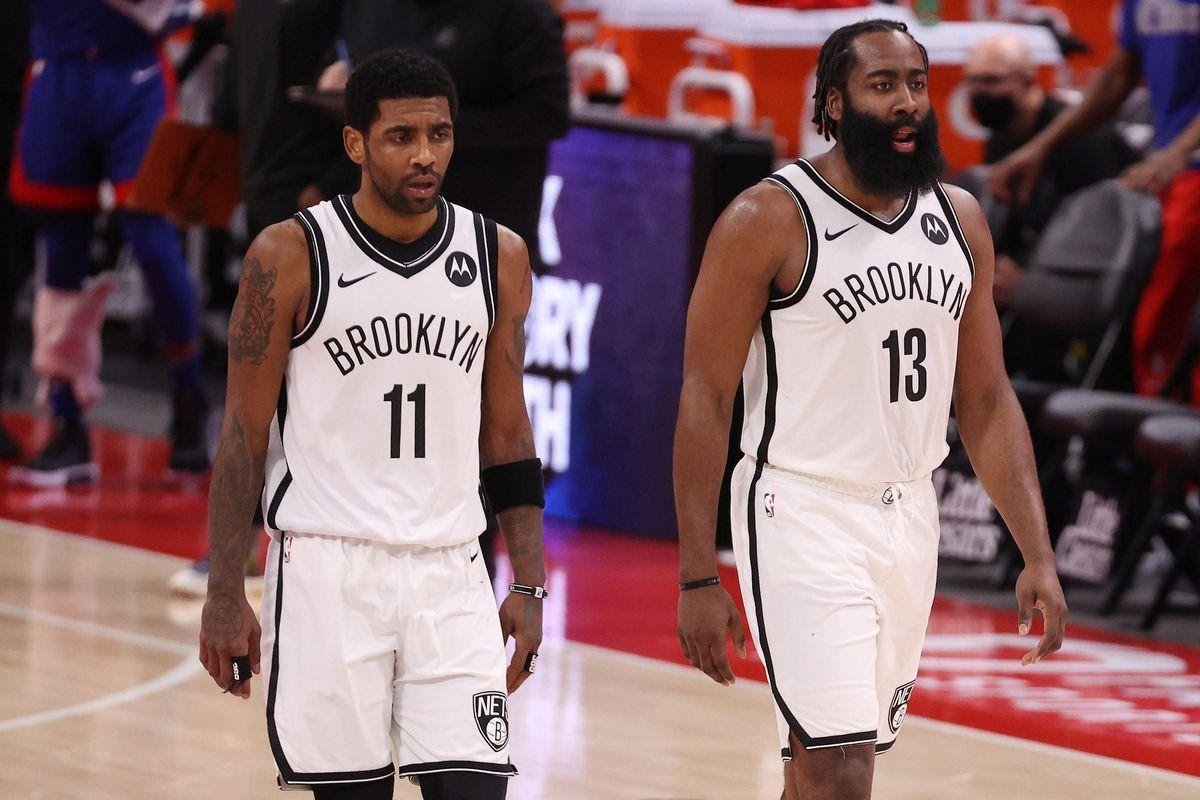 DETROIT, MICHIGAN – FEBRUARY 09: Kyrie Irving #11 and James Harden #13 of the Brooklyn Nets while playing the Detroit Pistons at Little Caesars Arena on February 09, 2021, in Detroit, Michigan. NOTE TO USER: User expressly acknowledges and agrees that, by downloading and or using this photograph, User is consenting to the terms and conditions of the Getty Images License Agreement. (Photo by Gregory Shamus/Getty Images)

Although their starting lineup is injury prone, this team is something to look out for as we head towards the post-season when healthy.

Mark my words, if it’s not this season they make it, it’ll be within the next few years if everyone stays healthy.

With their recent performances, it looks like everyone likes being on the court together, and they all function well.

The duo between Irving and Durant and Irving and Harden have been exciting to watch. Fans are excited to see Durant and Harden share the court again on the same team since they’ve both been on OKC.

Also, the lob city duo between DeAndre Jordan and Blake Griffin are reunited, so that’s another duo to look forward to.

With the sudden interest in JaVale Mcgee, the Nets are also looking to add more depth to the center position.

Overall this team is stacked more than capable of being more than just a playoff team. 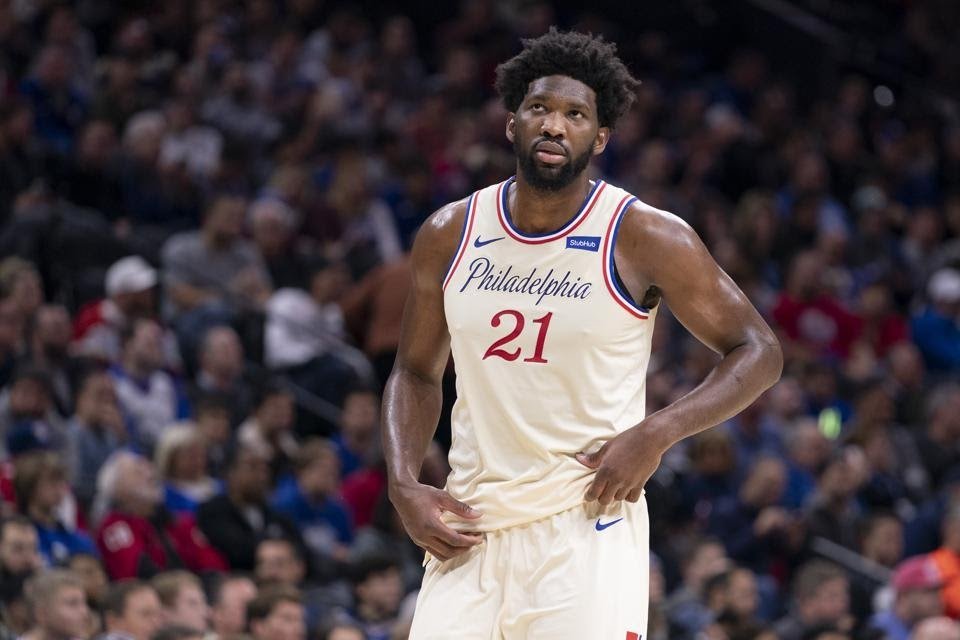 PHILADELPHIA, PA – NOVEMBER 30: Joel Embiid #21 of the Philadelphia 76ers looks on against the Indiana Pacers at the Wells Fargo Center on November 30, 2019, in Philadelphia, Pennsylvania. The 76ers defeated the Pacers 119-116. NOTE TO USER: User expressly acknowledges and agrees that, by downloading and/or using this photograph, user is consenting to the terms and conditions of the Getty Images License Agreement. (Photo by Mitchell Leff/Getty Images) GETTY IMAGES
Even when dealing with injuries, the 4x all-star has still been able to put up a consistent average of around 20 points a game while having a career stat of 48% from the field. However, others may argue that Nikola Jokic is better. Comparing the two for one, Jokic has a better backcourt, arguably one of the most underrated points guards, Jamal Murray. From a defensive standpoint, both Murray and Jokic are threats offensively; both players have on and off games when the defense focuses on them. However, despite being doubled and even tripled teamed, Embiid still maintains an average of 30.2 points per game this season. Not to mention he’s currently one of the top MVP candidates. With six fewer games played, Embiid is currently outscoring, outrebounding, and overall having a better defensive and scoring year than Jokic. However, giving credit where credit is due, Jokic is having a better year handling the ball and shooting. But playmaking and shooting can only get you so far, especially since the nuggets currently sit at the sixth seed in the west. 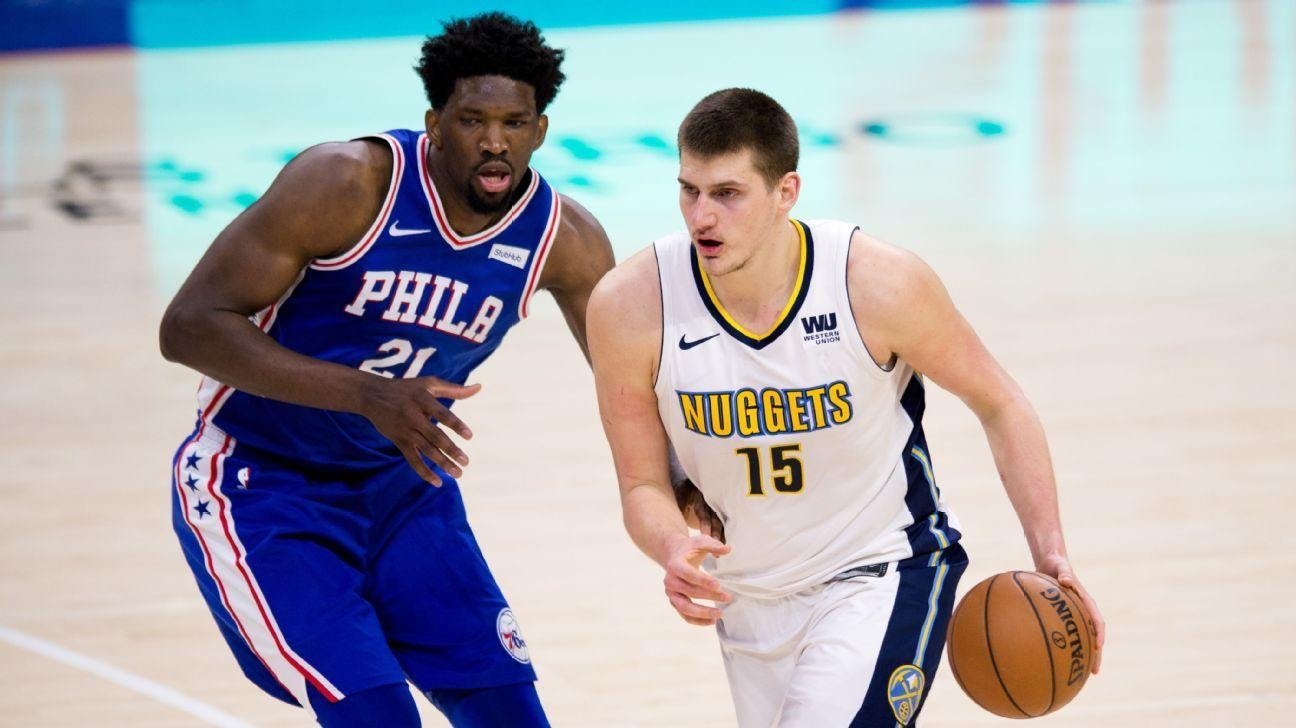 Who is the better pick in 2018-19 fantasy basketball drafts: Joel Embiid or Nikola Jokic? Photo by Kyle Ross/Icon Sportswire
But we also never gotten into dominance between the two and primarily Joel Embiid himself. In the current 2020-2021 season, both players have had 40 point games with Embiid’s better stat line. Comparing their 40 point games, Jokic’s stats that game was 41-5-5-1 shooting 53% against the Trail Blazers. In comparison, Embiids was 40-19-3-1-2, shooting only 51% against the Jazz. Let’s also not forget that Embiid dominated Rudy Gobert while Jokic was dealing with Enes Kanter. Though Kanter didn’t have the best scoring night, he still managed to grab 14 rebounds against Jokic. Don’t get me wrong; both centers are dominant, but when you’re able to have a poor shooting night while also getting tripled and still managed to drop 18 points says a lot. Against the Raptors, Embiid put up 18 points shooting a terrible 3-13, proving to be one of his worst shooting nights this season. Let’s also not side away from the fact that when Embiid has a high-scoring game, his stat line is better than Jokic’s. Embiid’s best game so far in the season against the Bulls. He put up 50-17-5-2-4, which is better compared to Jokic’s 41 point game against Portland. As the season moves on, we’ll keep seeing how both centers play and how dominant each can be. But with how consistent Embiid has been, there should be no doubt that he’ll take home the MVP this year. Remember, trust the process.