A Bigger Collapse Than Comeback 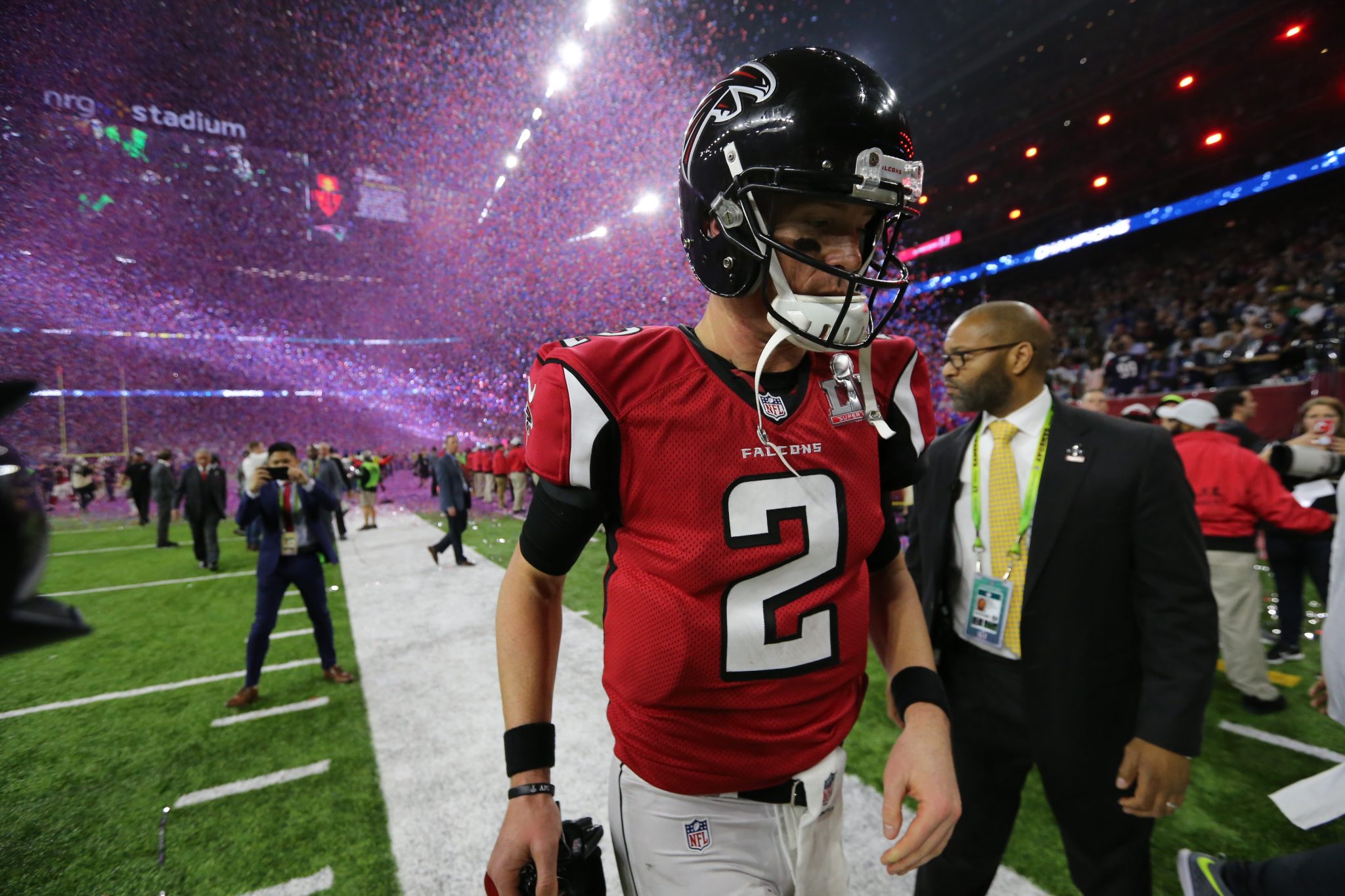 This past Sunday, the Braves became the latest Atlanta sports team to blow a big lead.  The Braves blowing a 3-1 series lead in the NLCS to the Dodgers was bad, but it is still not as inconceivable as the Falcons meltdown back on February 5, 2017.  As we all know by now, the Falcons blew a 28-3 third quarter lead in Super Bowl LI to the New England Patriots.  Give New England tremendous credit for scoring the game’s last 31 points, but Super Bowl LI was a game the Patriots never should have had a chance to come back in.
Instead of recapping the entire game, let’s just fast forward to the Falcons’ chances to seal the Super Bowl.  After New England scored a touchdown late in the third quarter to make it 28-9, Atlanta recovered the onside kick.  Starting on the Patriots’ 41-yard line, the Falcons not only failed to pick up a first down, but also knocked themselves out of field goal range thanks to a Jake Matthews holding penalty.  But Atlanta was still in good shape.  The Falcons punted the ball back to the Patriots to start the fourth quarter leading by 19.
New England proceeded to move the ball down the hash marks field to get a field goal.  The Patriots made it a two-score game at 28-12, but they took 5:03 off the clock in the process.  New England was a dink and dunk offense who had trouble with Atlanta’s pass rush, thus they needed long drives to score.  The Patriots’ previous 75-yard touchdown drive took 6:19 off the clock.
So, with 9:44 left, the Falcons got the ball back up 16.  Likely at this point in the game, Atlanta only loses if they turn the ball over.  Lo and behold, that is exactly what the Falcons did.  Give credit where credit is due, Atlanta was smart to run the ball on first and second down, but the third down play-call was and still is beyond unacceptable.
On 3rd & 1 from his own 36-yard line, Matt Ryan for some reason dropped back to pass.  Even if Ryan throws an incompletion, Atlanta could have punted and pinned the Patriots deep down 16 with a little over eight minutes remaining.  An incompletion or completion never came as Ryan was stripped by Dont’a Hightower. 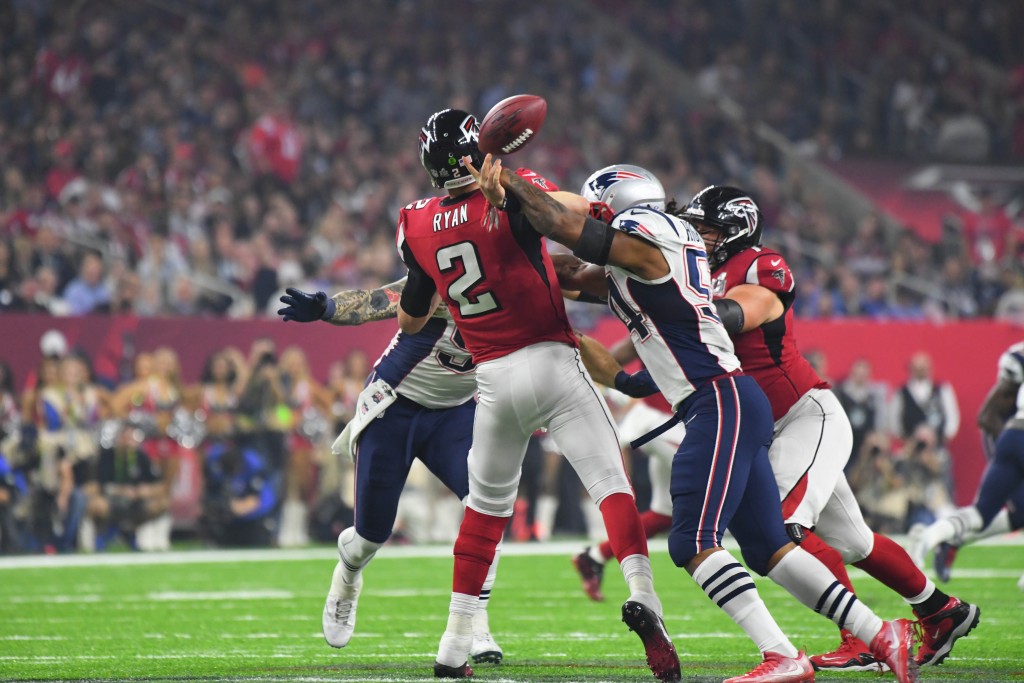 Why did Atlanta pass in the first place and not run it?  They had both Devonta Freeman and Tevin Coleman, who the last time I checked, are both very capable at converting a 3rd & 1.  A first down in that spot probably ices the game assuming Atlanta chews more clock. Even if New England stuffs the run on 3rd & 1, the clock continues to wind as Atlanta punts.   Instead, New England now had a short field and the Falcons’ defense began to tire.
Against a tiring pass rush, Tom Brady took his team into the endzone with 5:50 left.  For the first time all night, Brady had hit his rhythm.  Thankfully for Atlanta, they were still up 28-20 and getting the ball back.
What happened on this drive will haunt the city of Atlanta for years upon years.  On 2nd & 8 from the Patriots’ 49-yard line, Ryan found Julio Jones for a remarkable 27-yard tiptoe catch on the sideline.  With an eight-point lead, Atlanta had a 1st & 10 from the Patriots’ 22-yard line with 4:40 remaining. Jones’ sensational catch should have iced the game.
If you are Dan Quinn, you need to understand the importance of melting the clock and most imperatively coming away with at least a field goal.  Brady has gotten hot, my defense is tired, and I need to make this a two-score game.  This all should have gone through Quinn’s mind but probably did not. Let’s not forget about offensive coordinator Kyle Shanahan’s offense, who was moving quickly and not killing clock.
Instead, the Falcons only ran it once.  On second down after a -1-yard run, Ryan again inexplicably dropped back to pass.  The good news, he did not get stripped.  The bad news, he took a -12-yard sack.  Atlanta was still in field goal range on the New England 35-yard line, but a 40-yard field goal was now 53 yards.  Not great, but not the end of the world.  On third down, everything seemed to go as planned.  Ryan completed a 9-yard pass to Mohamed Sanu to shorten the field goal attempt.  Once again, Jake Matthews took a killer holding penalty to negate the gain.  After an incompletion on 3rd & 33, Atlanta was forced to punt it back to Brady with only an eight-point lead. 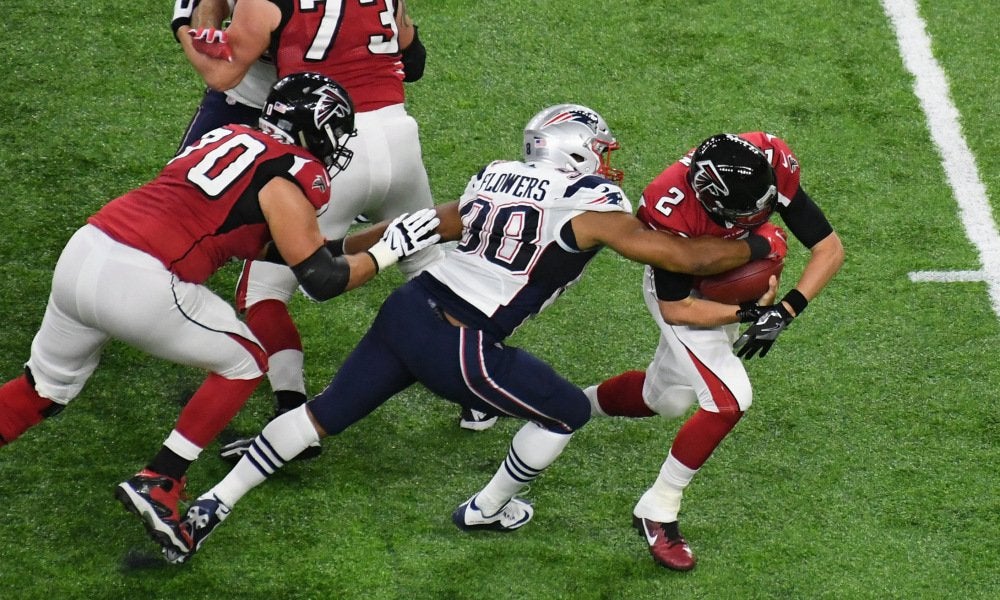 The play calling by the Falcons in these five plays borders insanity and are rightfully called the five downs to forget.  I can forgive them for the fumble, but when you have a chance to seal a Super Bowl against Tom Brady, you need to get it done.  The Falcons, by losing 23 yards in four plays, gave the Patriots yet another chance to come back they never should have had.  I cannot emphasize enough how important it is to come away with a field goal here.  Brady was in rhythm to the point where he was not going to be stopped.  Quinn needed to understand that his defense, who had been on the field for 76 plays at that point, was gassed and had nothing left in the tank.  They were not going to stop Brady again. Conversely, Shanahan’s offense had only run 42 plays at this juncture.
All Atlanta had to do was run the ball straight ahead three straight times.  What are the benefits of this?  You kill the clock, force New England to call timeouts, and oh yeah, you go up two scores assuming Matt Bryant makes the field goal.  Even if the Patriots call all three timeouts, the Falcons still would have been up 31-20 with about 4:20 left.
The ensuing touchdown the Patriots scored to tie the game would not have mattered had Atlanta been competent and ran the ball to stay in field goal range.  Unless New England recovered the onside kick, the Atlanta Falcons would have won Super Bowl LI 31-28.
Instead, the game went into overtime and you knew if the Patriots got the ball first Brady was going to put it in the endzone. Sure enough, New England won the coin toss and got the ball to start the first overtime in Super Bowl history. Against the gassed Atlanta defense, Brady took his team right down the field for the win 34-28 as James White scored the winning touchdown on a two-yard run. 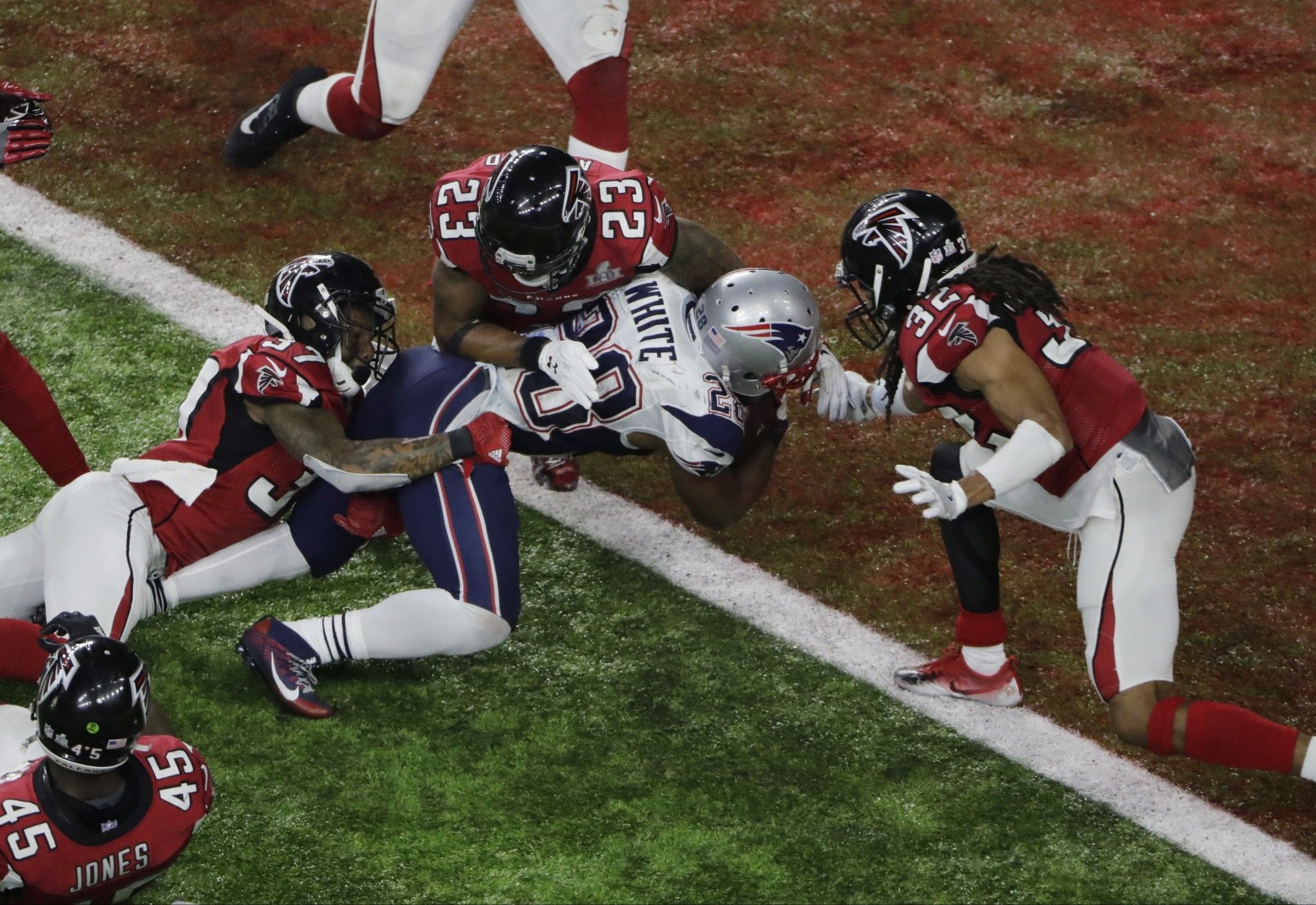 It is never going to go away.  The stigma of 28-3 will never escape the Falcons and the city of Atlanta unless the franchise wins a Super Bowl.  Matt Ryan, Dan Quinn, and Kyle Shanahan will forever have this stain on their careers.  A stain that could have been easily avoided by Atlanta running the ball to kill the clock, therefore also killing New England’s chances of completing an impossible comeback.