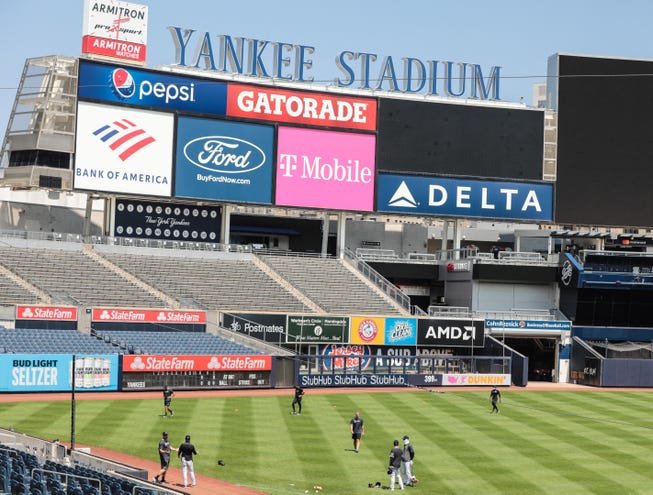 While most of the United States is preparing to introduce the business world back to society, my focus is on sports. Here is a preview of the 2020 New York Yankees.

FIVE QUESTIONS PLAGUING THE YANKEES FOR 2020.

COVID provided ample time for both players spring training injuries to heal and they should be ready to pound in the shortened 60-game format.

While there is no doubt Cole is the free-agent prize of the offseason, will his success over the last few seasons continue in the Bronx? Two things point to a big season for Cole in NY.

– He is an innings eater — Cole has thrown 200 or more innings in four of his last five seasons. Leading this staff, I project him to throw at least 210 innings.

– His strikeout total has increased significantly over the previous two seasons (avg. 13.1 K per 9), while his WHIP has evaporated (0.962).

One slight concern is for Cole is his inexperience at Yankee Stadium. He only has one career start during the regular season in the Bronx but did throw seven shutout innings in his only postseason appearance (Game 3 of 2019 ALCS).

3. Can they stay healthy or will depth again save them?

The Yankees lost an incredible 2,336 man-games to injury, 253 more than the second team on that list, the Pittsburgh Pirates. Despite that, the Yankees still won 101 games.

With the shortened season of 60 games, and availability of 60 players, it’s impossible to reach those numbers in 2020. However, the uncertainty surrounding the coronavirus will make this interesting.

A direct result of all those injuries saw contributions from unexpected players. Gio Urshela, Mike Tauchman, Cameron Maybin, and Mike Ford combined for a .880 OPS. Such results repeated in 2020 are unlikely.

2. Will they miss Didi Gregorius?

While Didi played in only 82 games last season, his presence took a lot of pressure off a position that replaced a Hall of Famer, which will be inducted into Cooperstown this season. Gregorius averaged 20 HR, 75 RBI, and .765 OPS the previous four seasons.

Didi also came to play when it mattered. Over the last three postseasons, only Aaron Judge has more hits (26 to 25) and RBI (17 to 16) than Gregorius among the Yankees.

Can Gleyber Torres and Miguel Andujar handle the pressure now that Didi is gone?

1. Can Chapman and bullpen be consistent enough in big spots?

While the Yankees bullpen numbers in 2019 were magnificent, (finished second to the Rays in WAR and were one of three MLB teams to record over 10 K per 9 innings) Loaisiga, Ottavino, and Chapman struggled in the postseason. With Chapman missing most of the early part of the season with COVID, how will bullpen perform getting more work and shorter periods of rest?

Yankees should continue to ring the bell

The Yankees led the majors in runs scored (943), and their 306 HR were one shy of the Minnesota Twins who set an MLB record in 2019. With the same cast of players returning, they should continue to post impressive offensive numbers.

Unequaled success in the wild-card era

Since the MLB went to the wild-card format in 1995, no team can equal the success of the Yankees in playing beyond the regular season. Last season saw the Yankees make their 21st postseason appearance over that span (next closest is Atlanta with 16). Their 12 LCS appearances and seven World Series appearances are also the most over that era.